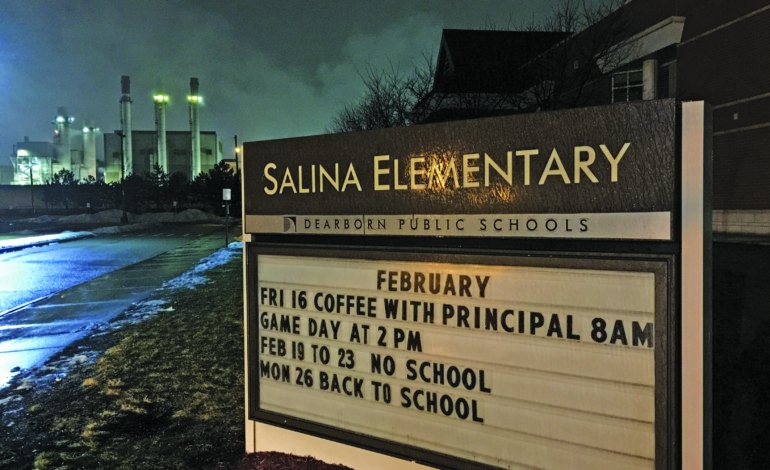 Outside Salina Elementary School, less than one mile from Dearborn Industrial Generation, LLC - Photo by Stephen Martin / The AANews

DEARBORN — A recently approved permit called 163-17 and submitted by Dearborn Industrial Generation, LLC (DIG) will allow it to increase its emissions of formaldehyde, a chemical recognized by the National Toxicology Program to be a known human carcinogen.

The Air Quality Division of the Michigan Department of Environmental Quality (MDEQ) approved Permit 163-17 on January 31.

Lynn Fiedler, director of the Air Quality Division, sent a letter to Jimmy Chong, asset manager of DIG, to make him aware of the approval.

“This letter is in reference to your permit to install application identified as No. 163-17 for an increase in allowed formaldehyde emissions which will make the existing facility a major source for hazardous air pollutants,” Fiedler, who made the final decision on the approval, wrote. “After careful consideration of the issues and pursuant to the delegation of authority from the director of the MDEQ, I have approved PTI No. 163-17.”

DIG is located less than one mile from Salina Elementary School.

Former State Rep. Rashida Tlaib said she thinks the MDEQ should work more with the Michigan Department of Public Health when making these decisions.

State Rep. Abdullah Hammoud (D-Dearborn) said he thinks the biggest weakness of the MDEQ is that it’s legally bound to approve a permit that abides the legal threshold.

“As long it falls below the legal threshold they’re obligated to stamp the approval,” Hammoud told The AANews. “Changing those thresholds fall within the governor and the legislature and they are unwilling to lower those limits. The biggest factor is that the DEQ is not allowed to take into account the comprehensive impact with all the faculties in a specific region. The DIG facility may fall below a certain threshold of emissions but collectively all of the facilities may not; but the DEQ is not able to take that into consideration. I think that is one of the weakest qualities of our DEQ, that we haven’t been enabled them to do that yet.”

An overflow crowd of approximately 150 people attended a public comments hearing in the Salina Elementary School library on January 16 to discuss two permits for which DIG sought approval. The Air Quality Division of the MDEQ subsequently received about 350 written comments and roughly 67 verbal comments, according to a letter from Fiedler.

The approval comes after a  brief celebration throughout the community when the first permit, No. 56-17,  to install a fourth simple cycle combustion turbine generator, was voided after Chong withdrew the permit from consideration. Fiedler wrote a letter to Chong to notify him of this information as well.

“This application has been voided per your request to withdraw the application received in an email on January 26,” Fiedler wrote.

The AANews asked Tlaib about the chain of events.

“They’re working the system and the system currently is broken because what they’re outputting now is not being looked at in combination with every other pollutant in the area,” she said. “Right now the MDEQ gives permission to pollute. They regulate pollution, they don’t stop it. To me, the only people that can stop it is the public health department that can reach out and start pushing back on behalf of the families.”

Listed in the general conditions section of Permit 163-17 is the disregard for plant life that is not of “significant economic value.”

“Operation of this equipment shall not result in the emission of an air contaminant which causes injurious effects to human health or safety, animal life, plant life of significant economic value, or property, or which causes unreasonable interference with the comfortable enjoyment of life and property.”

Further into the general conditions are the details of the testing requirements for the formaldehyde emissions.

DIG is required to perform two tests by January 31, 2019, one in the summer and one in the winter.  After those tests, it will determine which season is worst and only test once per year in that season.

However, DIG will only be tested once every three years if it tests under the 75 percent threshold for two consecutive years.

The general conditions note that it is the permittee’s responsibility to record, calculate and maintain test results.

“If testing results in emission factors above the listed emission factors in SC V.1, the permittee shall submit notification of the high results, an analysis of the circumstances that revolved around the high tested values and any intended action to address future emissions,” the permit reads. “The notification shall be submitted within 90 days following the last date of the test.”