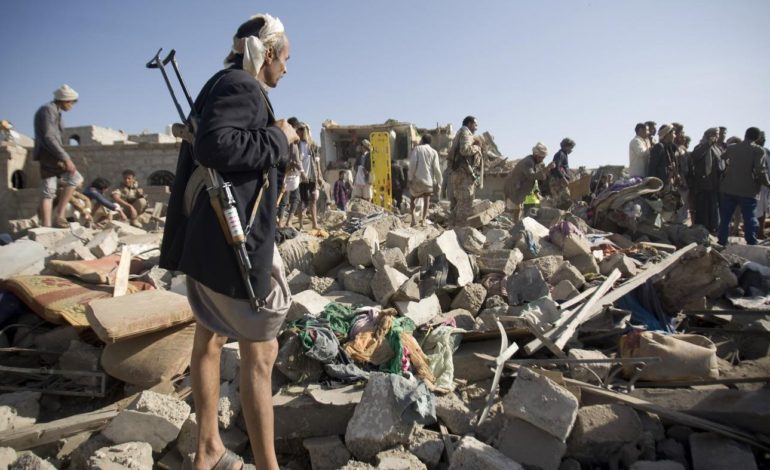 UNITED NATIONS — The United Nations Security Council is considering a British proposal to praise Saudi Arabia and the United Arab Emirates for pledging nearly $1 billion to ease Yemen’s humanitarian crisis, even as U.N. experts accuse a Saudi-led military coalition of using “the threat of starvation as an instrument of war” in Yemen.

The draft statement, seen by Reuters on Thursday, broadly expresses concern about civilian casualties and restrictions on commercial and humanitarian food, fuel and medical imports and calls on all parties to allow unhindered aid access in Yemen.

The Saudi-led coalition intervened in Yemen in 2015, backing government forces fighting Iran-allied Houthi rebels. The draft statement only calls out the Houthis by name, condemning the group for missile attacks on Saudi Arabia and using sea mines.

“The Security Council should be naming and shaming everyone,” said Human Rights Watch U.N. Director Louis Charbonneau. “A statement that condemns one side, the Houthis, but doesn’t even mention the abuses of the other, the Saudi-led coalition, simply nurtures the atmosphere of impunity.”

The draft statement, to which the 15-member council has to agree by consensus, “notes with appreciation” the Saudi Arabia and UAE pledge of humanitarian aid and a Saudi intention to deposit $2 billion into Yemen’s central bank to shore up a weak Yemeni currency.

UAE is part of the Saudi-led military coalition in Yemen.

Independent U.N. experts monitoring Yemen sanctions reported to the Security Council that a coalition blockade in November of areas under Houthi control — which Riyadh said was to stop a flow of arms to the Houthis from Iran — “had the effect of using the threat of starvation as an instrument of war.”

Yemen relies heavily on food imports and is on the brink of famine. Nearly 1 million people have been infected with cholera.

The Saudi U.N. mission did not immediately respond to a request for comment on the U.N. experts’ report.

Iran has denied supplying the Houthis with weapons.

“Houthi forces are also using the population as a pawn when they escalate their strikes against Saudi Arabia, knowing full well the brunt of reprisals will be felt by the civilian population,” according to the report made public on Thursday.

The U.N. experts said Saudi-led coalition air strikes and indiscriminate use of explosives by the Houthis and fighters loyal to late former Yemeni president Ali Abdullah Saleh disproportionately affected civilians in Yemen in 2017.

“The panel has seen no evidence to suggest that appropriate measures were taken by any side to mitigate the devastating impact of these attacks on the civilian population,” the report said.