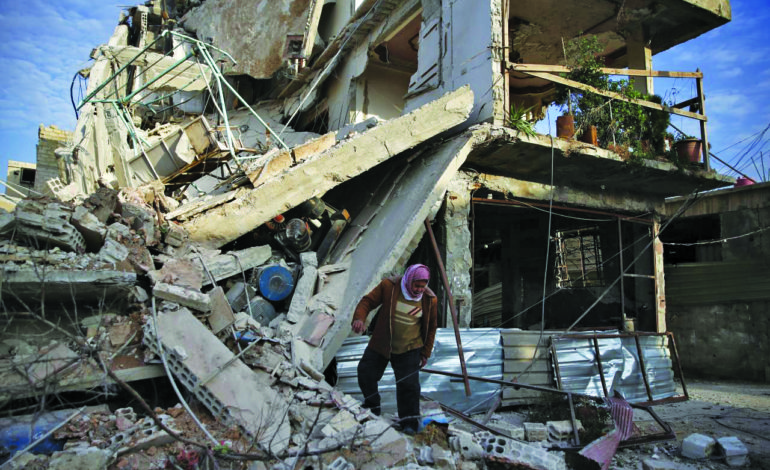 A person inspects a damaged building in the besieged town of Douma, Eastern Ghouta, Damascus, Feb. 20 - Photo by Reuters

The United Nations Security Council will vote on Friday on a draft resolution demanding a 30-day truce in Syria to allow aid deliveries and medical evacuations, but it was not immediately clear if the text had won the support of Syrian ally Russia.

The vote comes as warplanes pounded eastern Ghouta, the last rebel enclave near Syria’s capital, for a fifth day running. U.N. Secretary-General Antonio Guterres appealed on Wednesday for an immediate end to “war activities” there.

On Thursday, Russia proposed amendments to the resolution drafted by Sweden and Kuwait, arguing that the language was unrealistic and that the 15-member Security Council could not simply impose a truce on Syria without consulting the parties.

It was not immediately clear what changes were made to the text. The council is due to vote at 11 a.m. on Friday, said Kuwait’s U.N. mission, president of the council for February.

A resolution needs nine votes in favor and no vetoes by Russia, China, the United States, Britain or France. Russia has cast 11 vetoes on possible Security Council action on Syria since its civil war began in 2011.

Previous attempts at a cessation of hostilities in Syria have quickly unraveled.

Russia would back 30-day Syria ceasefire but not for militants

Foreign Minister Sergei Lavrov was quoted on Thursday as saying that Russia is ready to consider a 30-day ceasefire in Syria but only if it does not cover ISIS, Nusra Front and other groups, “who are shelling residential quarters of Damascus.”

The Kremlin also said on Thursday that Russia was not responsible for the situation in the rebel-held district of eastern Ghouta.

“Those who support the terrorists are responsible,” Kremlin spokesman Dmitry Peskov told a conference call with reporters. “Neither Russia, nor Syria, nor Iran are in that category of states as they are waging an absolute war against terrorists in Syria.”

Earlier on Wednesday, The Russian military said that talks to try to peacefully resolve the situation in Syria’s Eastern Ghouta had broken down and that rebels there had ignored calls to cease resistance and lay down their arms.

Russia’s ceasefire monitoring center in Syria, which is run by the Russian military, said in a statement later on Wednesday that talks with the rebels aimed at ending the violence in the area had broken down.

In a statement, it also accused the rebels of preventing civilians from leaving the conflict zone.

“A critical humanitarian and socio-economic situation is developing in eastern Ghouta,” the statement said.

“Calls by the Russian ceasefire monitoring center for illegal armed rebel groups in eastern Ghouta to cease resistance, lay down their weapons and regularize their status have produced no result.”

Syrians experience violence and destruction twice each week on average, an aid agency said on Thursday, highlighting the ongoing plight of civilians as the country’s bloody civil war approaches its eighth year.

The research, conducted by the charity Mercy Corps, surveyed 1,600 people in more than 120 communities across Syria.

The survey, which was backed by the British government, found that civilians experienced about two conflict-related incidents per week in the prior year, some causing injury or death and others razing homes, schools, clinics and mosques.

The reality in south-central Syria, where most besieged areas lie, was particularly grim, with residents experiencing about three such incidents per week, according to the survey.

Those communities saw an average of 65 civilians killed, 25 homes razed and more than five community spaces destroyed over the previous year.

“Since the beginning of the year, the situation in some parts of Syria has really deteriorated,” Ingy Sedky, spokeswoman for the International Committee of the Red Cross in Syria, told the Thomson Reuters Foundation.

“Some families have stopped sending their children to schools because it’s not safe anymore. So there is this kind of insecurity among residents.”

In a fresh surge of violence, government air strikes on the rebel-held eastern Ghouta area near Damascus have killed more than 300 people since Sunday night.

Along with Idlib province and part of Aleppo province in the north, and a strip in the southwest, it is one of a handful of areas left where large numbers of people remain in territory controlled by fighters seeking to overthrow Assad. The president has vowed to regain control over all of Syria.

Residents and opposition figures say the Syrian government and its allies are deliberately destroying infrastructure and paralyzing life in what they describe as a “scorched earth policy” to force rebels to surrender. The Syrian army accuse the rebels of causing deaths by firing mortars on the heavily defended capital.

The United Nations Syria envoy Staffan de Mistura called for a truce in eastern Ghouta, and aid agencies have sought humanitarian access to those trapped by the bombardment.

The civil war has also left many Syrians across the country vulnerable to food shortages and displacement, the report said.

About half of those surveyed described not having food in the house at least once in the past month, while a fifth said one or more members of their household had gone to bed hungry.  On average, internally displaced Syrians reported having moved almost four times since the start of the war.

More than 6 million people are uprooted within Syria.