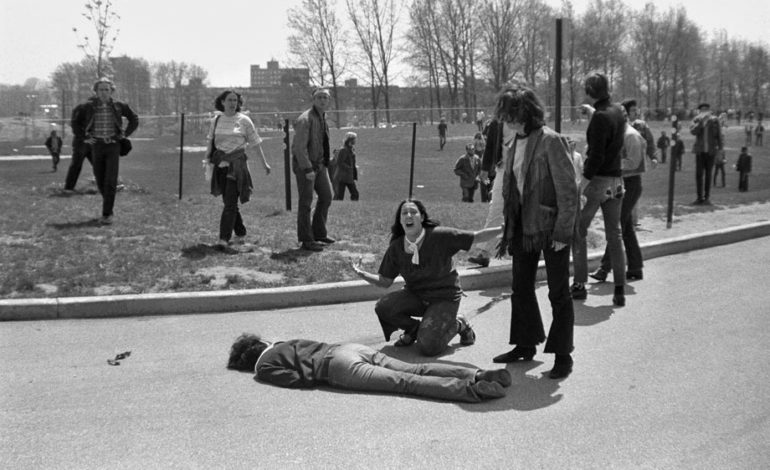 Mary Ann Vecchio screams as she kneels over the body of Jeffrey Miller during an anti-war demonstration at Kent State University in Kent, Ohio, May 4, 1970 Students are evacuated from Marjory Stoneman Douglas High School during a shooting incident in Parkland, Florida, Feb. 14 – Photo by Reuters

My sister Allison was shot and killed in a domestic U.S. military massacre during a lunch time antiwar protest at Kent State University on May 4, 1970. Allison was 19-years old when she was targeted for assassination. Her spirit reminds us the most heinous of all massacres is when those killed are defenseless young people at their schools.

On the phone last week with my colleague, Emily Aigner Kunstler, Emily told me the news of the 17 massacred, 15 injured, at a high school in Parkland, Florida. I heard her words but wasn’t able to really take them in. I found it hard to react. After all, it was the 18th gun-related incident at an American school since the beginning of 2018, and is now just about an every other day occurrence in the United States of Gun Violence.

Later, as I watched the TV reporting of the mayhem and the lives lost, it struck home with me that I know the horror of how this feels, especially to the families personally hurt.

I know what those grieving 17 families have been going through since their Valentine’s Day. Loss beyond words. Hurt beyond description. A feeling that nothing will change and no one will come to their aid to make change. The needlessness of the deaths staring you in the face. The flower of youth snuffed out by America’s inability to CURB THE URGE to kill and massacre with automatic weapons.

I know that after the dust settles, to those killed and their families, it won’t matter who did the killing … whether it was a disturbed individual, a White supremacist, the military or law enforcement. Their children are no longer alive. The hopes and wishes for what those young people might have become are too painful to acknowledge. The family lives of those harmed will never be the same.

After the dust settles, will there be healing? Will our culture demand amends be made? With the NRA running every show in our government, the answers are … there will be no healing, there will be no amends made, there will only be more trauma.

Our society easily forgets that the children are the future jewels and dreams of what our culture may become. A society that kills its children, and refuses restorative justice for all involved in massacres, is no longer a caring, protective culture. Instead, it is a culture that honors the almighty dollar, enabling massacres with automatic guns over the lives of its young.

When American TV audiences are exposed to continuous footage of massacres (and being told to watch it by TV pundits), we all become a little less feeling.

As Baby Boomers, the effects of the Kent State and Jackson State massacres happened to all of us … not just my family or those who were killed or wounded. All the young people alive back then remember in detail their story as to how those massacres affected them for the rest of their lives. How they were severely changed by the murders … how ever since they haven’t been able to trust their government.

But our government and leaders refuse healing. There is no recognition of these traumas as nationwide traumas. The wounds stack up over a lifetime in peace-loving folks, one massacre at a time.

Will Parkland massacre survivors be sought to share their accounts of the trauma? Will they be formally acknowledged, honored, given a voice or a way to make amends, find their healing? That’s what I want for them. These children deserve their healing. Hell, we all do!

Massacres DEMAND healing and for amends to made. The damaging effects and traumas do not go away. The blood of these young martyrs seeps into the land where it stays forever, a kind of curse on us all for not protecting our children.

WILL AMERICA EVER LEARN TO HEAL & MAKE AMENDS?

-Laurel Krause is a writer dedicated to raising awareness about ocean protection, safe renewable energy, and truth at Kent State. She publishes a blog on these topics at Mendo Coast Current. She is the cofounder and director of the Kent State Truth Tribunal.