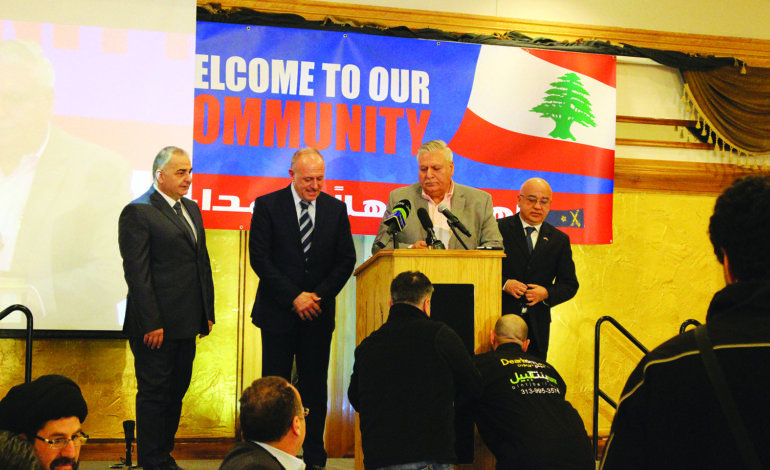 General Mohamad Al-Ayoubi, commander of the Beirut Police Department; General Walid Jawaher,  commander of security for foreign embassies and General Marwan Slailati, commander of Internal Security Forces of Mount Lebanon District, arrived in Michigan last Saturday by the invitation of Dearborn’s 19th District Court and the Police Department. The Dearborn officials and the generals shared their best practices in crime fighting, countering terrorism and strengthening relations with their respective communities.

The reception began with Wayne County Circuit Court Judge Mariam Bazzi welcoming the generals and praising their efforts “to enhance security and stability in Lebanon at the most critical time.” She also thanked the court and Police Department for helping the generals to “develop their security, judicial and logistical expertise that will help them fight terrorism and extremism in their home country.”

Salamey, whose is seeking re-election in November, addressed the guests in their mother tongue, saying that, “in peacetime, in times of political disagreements, you will remain the symbol of national unity and the highest model of coexistence between the country’s citizens.”

He added that at a time when terrorism has become a global threat and random shootings are no longer random and are more frequent, initiatives taken by police departments to offer training, “will prove very useful and leave positive impact on fighting terrorist activities and crime. He praised the achievements of the Lebanese military and intelligence services in their decisive victories that have preserved the life and security of the Lebanese people, especially in the battle of Jaroud Arsal and continued struggle against Israeli aggression. That liberation embodied Lebanon’s “Golden Formula” of success: Its people, its army and its resistance, Siblani said.

With all the accomplishments Lebanon has achieved in difficult times, especially on the sidelines of the Arab Spring, Siblani expressed regret over the lack of services and the political and social turmoil plaquing the country.

“We always wish Lebanon the best,” he said. “It bothers us that it remains a prisoner of sectarianism, which will only lead the country into more divisiveness, which will deprive citizens from living peacefully and equally without favoritism.

Siblani stressed that fighting corruption and implementing real government reform are the keys to building a fair state that respects all its citizens. He also cited a study prepared by Former Lebanese Labor Minister Charbel Nahas and published by the Lebanese Al-Akhbar newspaper stating that since 2005, $200 billion have been stolen or embezzled from Lebanese funds.

“Is not that enough to sound the alarm and put an end to the corruption and systematic robbing from the Lebanese people?” he said.

“In this city we were a targeted minority,” Siblani said, referring to Dearborn. “In 1985, the mayor won election on an anti-Arab platform, but over the years we managed to move forward— and without help from anyone but ourselves — organize our ranks and encourage our community to get involved. Today, our efforts have produced significant results and we became a force throughout the Metro Detroit area and here in Dearborn.”

“Now we have a police chief who is Lebanese American, as well as the president of the City Council and the chief judge of the Dearborn court,” he added. “We have three of our community on the seven-member Dearborn Board of Education and two City Councilmen in Dearborn Heights. We also have four judges presiding in the Wayne County Circuit Court, and we are just beginning.”

General Jawaher delivered a short speech on behalf of the honored guests, expressing his deep gratitude to Judge Salamey and Chief Haddad for their support and offering to help the generals improve their security expertise.

“We felt sincere love and warmth from everyone we met in Dearborn,” he said. “We thank the police department and its officers for giving us the opportunity to benefit from their accumulated experience and we look forward to employing them in Lebanon.”

He hoped Lebanon, as well as all Lebanese expatriates abroad, would become united in the same way as the Lebanese in Dearborn have, which he described as a united and loving community.

At the end of the event, Haddad presented the three generals with Dearborn police badges.

Haddad told The AANews that during his time with the generals, he found that Lebanese security officials face greater obstacles when handling a crime, especially with funding and available technology, but employ “great on the ground investigations” that they still see through until the end. In an interview after the event, Al-Ayoubi told The AANews the Lebanese Internal Security Forces have developed a five-year plan to advance intelligence and crime-fighting methods and technologies that they hope to present to the county’s parliament soon.

He said the “fruitful” visit was part of a joint-initiative between the U.S. State Department and the Lebanese Internal Security Forces that began about four years ago to coordinate on community policing efforts.

He also said discussions ranged from streamlining Lebanon’s criminal justice system — from an arrest to sentencing — and effectively communicating with the public.

“We have taken an important step in training police department staff to better deal with the surrounding environment, residents, shop owners, hospital staff and public officials,” Al-Ayoubi said, adding that he hopes to strengthen community trust by implementing in his department ways to more effectively and unobtrusively suppress crime.

“The community policing program did not stem from the vacuum, and we did not try to replicate experiences in other countries that differ from us in their culture, security and legal systems,” Al-Ayoubi said. “It is a program based on study and objective analysis, where studies and statistics were carried out to understand the nature of the problems experienced by citizens and their reactions to patrols and police barriers.”