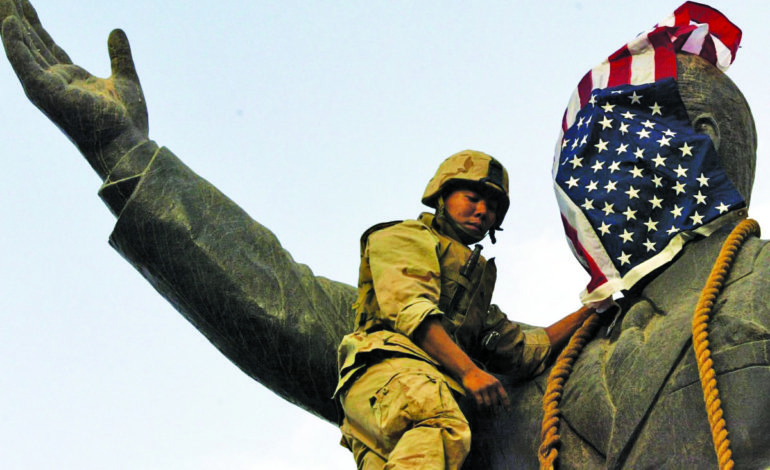 Over the next few weeks, I want to take a look back to February and March of 2003, to those fateful days leading up to the Bush administration’s disastrous invasion and occupation of Iraq. I remember all too well the lies that were told, the hysteria that was created, the bullying tactics that were used to silence debate and the mass mobilization that was organized in opposition to the war.

The Iraq war has had a staggering impact that continues to grow over time. The magnitude of this disaster can be measured in lost lives, treasure, capacity and prestige.

From 2003 to the formal withdrawal of U.S. fighting forces in 2011, the war took the lives of 4,500 Americans and well over 150,000 Iraqi civilians. And more than 600,000 U.S. veterans of these wars are now registered as disabled. To fully understand the war’s impact, however, we must also factor in the number of young men and women, who after multiple tours in Iraq and Afghanistan (400,000 served three or more tours of duty in these two wars) have returned home suffering from post-traumatic stress disorder (PTSD)—about 10 percent of veterans suffer from PTSD. A great number of them have tragically joined the ranks of the homeless or the addicted or they have committed suicide. Studies show that on an average night almost 40,000 veterans are homeless. And in recent years, the average number of suicides among this group of PTSD veterans is a staggering 22 per day—meaning that more young veterans of these two wars die each year at their own hands out of despair than died in battle in both wars combined.

The direct costs of the wars in Iraq and Afghanistan have been estimated to be almost $2 trillion, with trillions more needing to be factored in to cover the long-term health care and disability payments to the wars’ veterans.

The two long, unwinnable wars resulted in grounding down and exhausting the U.S. military. It also demonstrated their inability to decisively beat insurgencies and resistance movements. This proved demoralizing to U.S. troops and also established the limits of the world’s most powerful and expensive military machine.

At the same time, the Bush administration’s reckless and arrogant unilateralism (“you’re either with us or against us”) caused friction with allies and contempt for public opinion world-wide. By the end of the Bush administration, U.S. favorability ratings were at their lowest point, worldwide. Abhorrent U.S. behaviors exhibited during the war (Abu Ghraib, torture, Guantanamo, etc.) also fueled extremist currents, giving new life to al Qaeda which, though rooted in Afghanistan, metastasized, spreading its anti-American hate across many continents. And the weakened and depleted U.S. military spawned the unforeseen consequence of enabling the emergence of multiple and competing regional powers who were emboldened to expand their influence.

Of course, it wasn’t supposed to be that way. As envisioned by the wars’ main protagonists, the neo-conservative “Project for a New American Century”, a decisive U.S. victory in a war like the one they encouraged in Iraq was needed to secure American hegemony in the New World Order. They worried that at the end of the Cold War the U.S. had to project decisive strength to dissuade any would-be competitors. After a display of overwhelming force, they were convinced that the danger of a multi-polar world could be averted and the 21st century would be an American century.

As they rushed to war, the Bush administration and its neo-conservative acolytes engaged in a massive propaganda campaign of lies to win support for an invasion. When I say that they lied, I don’t mean their fabricated case about Saddam’s “nuclear program” or their false efforts to portray the Iraqi regime as the region’s principal sponsor of terror—this was the brief presented by then-Secretary of State Colin Powell at the United Nations in his failed effort to win international backing for the invasion. No, the more serious lies they told were done so in their effort to sell the war to the Americans as an easy, cheap and lofty venture.

In Congressional testimony and press briefings, high-ranking administration officials argued the war would only require between 60,000 to 90,000 troops (in fact, the administration fired the Pentagon general who at a Congressional hearing had admitted that the invasion and occupation of the country, if they were to succeed, would require more than 350,000 troops). The fighting, administration spokespeople said, would be over in a few weeks. U.S. troops would be greeted as liberators. And the total cost to the U.S. treasury would be between $1 billion to $2 billion before Iraqi oil production would kick in and cover the rest. If all this were not fanciful enough, the promoters of the war repeatedly told the American people that when the dust settled Iraq would become a “model democracy” that would serve as a “beacon for the New Middle East.”

In his speeches leading up to the invasion, Bush went further, saying that the war “will free people” and that his motivation was to bring “God’s gift of freedom” to the Iraqi people.

“We will go into Iraq…to make sure the hungry are fed, those who need health care will have health care and those youngsters who need education will get education.”

In the end, Bush succeeded only in mobilizing his base of right-wing evangelicals and neo-conservatives, both of whom were sold on the infantile fantasy they shared that a decisive blow delivered by a superior moral force would vanquish evil and lead to a “new order.”

It did not. And 15 years later we— and most especially the people of Iraq and the region— are living with the consequences of the disaster they brought down on us all: A shattered Iraq; an emboldened Iran; a weakened, war weary and wary America and a Middle East in which multiple regional and international powers are engaged in a number of deadly conflicts.