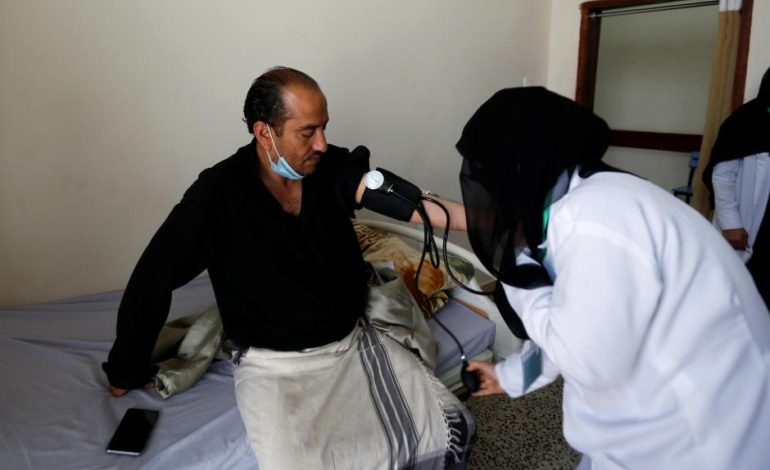 A volunteer nurse checks a patient at a charitable medical center which is offering free medical services to support those in need in Sanaa, Yemen February 26, 2018. REUTERS

SANAA – Volunteer doctors are offering free medical services for a week at a clinic in the Yemeni capital Sanaa to treat people impoverished by a war which has killed thousands and wrecked the economy.

The initiative, dubbed “Breeze of Hope,” is the first by a group of nurses and doctors to conduct electrocardiograms, x-rays and other procedures that Sanaa residents cannot afford.

Yemen has been hit by three years of civil war between the Hadi government backed by a Saudi-led military coalition and the Iran-aligned Houthi movement which controls the capital.

Key infrastructure has been bombed by Saudi-led air strikes while imports have been constricted by a near-blockade aimed at cutting off weapons supplies to the Houthis.

Amid a dispute between the government and the Houthis over who should receive public sector salaries and as the local currency has shed much of its value, many employees — including some medical staff — have not received wages in over a year.

For them, a chance at free healthcare is a rare boon.

“I came here because I don’t have the means or ability to go to a hospital,” said one patient, Mohammed Fuad.

“Our financial situation is difficult, and there are no salaries because of the war. That’s why we’re obliged to come to this charitable medical center.”

Mohammed al-Aqabi, the head of the initiative, said the help provided rare hope amid the gloom of war.

“The main purpose of running this center is to address the country’s catastrophic circumstances of war and destruction,” he said.

The organizers say they hope to repeat the initiative elsewhere in the capital and in other areas of the country soon.