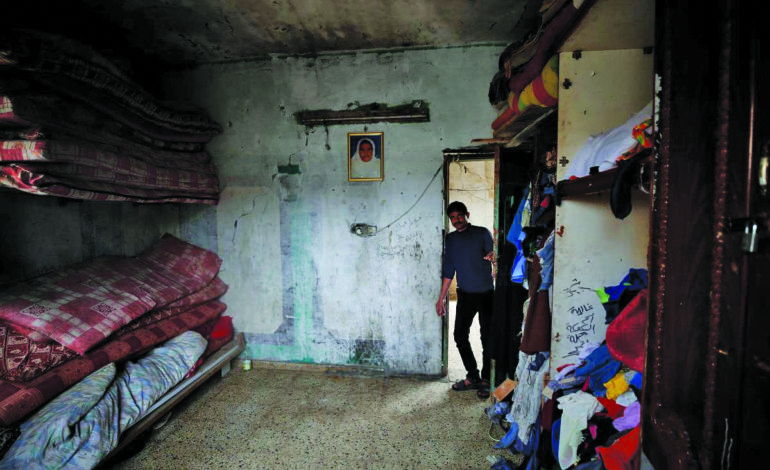 A Palestinian man stands in a house in the northern Gaza Strip Feb. 12 - Photo by Reuters

GAZA — The man who makes crisps, chocolate and vanilla snacks for Gaza had just finished explaining how his business was going through the worst economic crisis of his life when the lights went out, shutting down his factory. Again.

Wael Al-Wadiya has been running his food manufacturing business since 1985 – in a Gaza Strip that was very different from the one in which he and two million other Palestinians now live.

Back then Israeli settlers were still in Gaza, the Islamist militant group Hamas did not yet exist and Palestinians were still two years away from the first of the uprisings against Israeli military occupation that introduced the word “Intifada” to the world.

Sitting in a slowly declining industrial estate near the fortified border with Israel, the 51-year-old confectioner says that Gaza has been brought to a near-standstill by a decade of Israeli-led blockades and internal Palestinian divisions.

“The situation is very miserable. People’s ability to buy has fallen to a minimum, therefore our businesses and businesses in Gaza are suffering as never before,” Wadiya said.

He has cut production by 70 percent and wages by 30 percent. Employees who used to work each day now may work one day in three.

“Unless a miracle happens, factories and companies will close down and it will be the real death of the economy,” he said.

There has long been poverty in Gaza, but with unemployment now at 43.6 percent, according to the Palestinian Bureau of Statistics, even once-wealthy merchants are defaulting on debts, causing other businesses to collapse, like dominoes.

Many in Gaza blame Israel for the hardships, accusing it of placing an economic blockade on the enclave that has drastically reduced the movement of people and goods.

But Gazans also fault their own leaders, complaining of a power struggle between Hamas, the armed group that seized military power in Gaza in 2007, and Fatah, the secular party of Western-backed Palestinian President Mahmoud Abbas.

Both Hamas and Fatah levy taxes. Both run competing bureaucracies. And even electricity has become a tool of political power – until recently the blackouts that plagued Wadiya’s factory were exacerbated by Abbas cutting money for Israeli current for Gaza.

Israel, which pulled its settlers and soldiers out of Gaza in 2005, says it has been forced to control access to and from the territory to stop Hamas sending out gunmen and bombers, and from smuggling in weapons or material to make them.

A combination of war, isolation and internal rivalries has left Gaza in its current state.

Last year Abbas cut the salaries of 60,000 government employees in Gaza by 30 per cent, leaving them with little to spend in shops and markets after paying off bank loans. The sums of bounced checks in Gaza nearly doubled from $37 million to $62 million between 2015 and 2016, and then again to $112 million in 2017, according to the Palestinian Monetary Authority.

This lack of buying power contributed to a drop in imports through the one remaining commercial crossing with Israel, with just 350 truckloads per day compared with 800 in the last quarter of 2017.