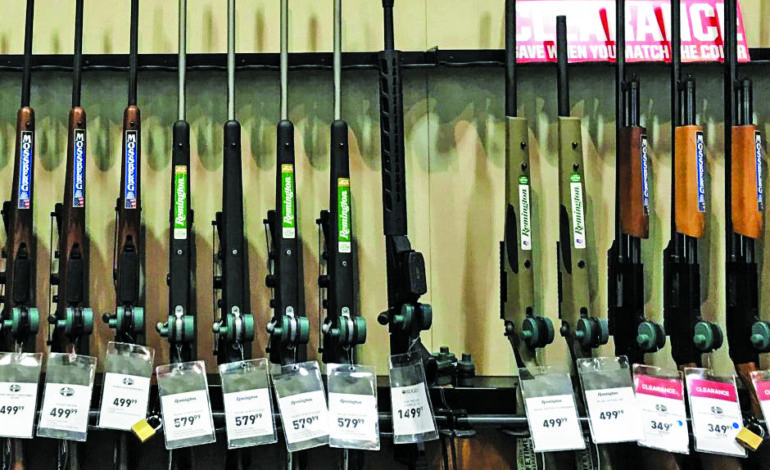 Guns for sale inside of Dick's Sporting Goods store in Stroudsburg, Pennsylvania, February 28 - Photo by Reuters

This week, Kroger, Walmart and Dick’s Sporting Goods said they will stop selling firearms and ammunition to buyers under the age of 21, becoming the first of three major U.S. retailer to set restrictions that are tougher than government regulations.

The restrictions come two weeks after social media-savvy students ignited an intense debate on gun control in the United States following a deadly shooting spree at their Florida high school.

“Recent events demonstrate the need for additional action on the part of responsible gun retailers,” Kroger said in an email.

Kroger operates 133 Fred Meyer stores in Alaska, Idaho, Oregon and Washington. It sells firearms in 43 of those stores.

The company will also stop selling assault-style rifles in Alaska. It ceased such sales in its Fred Meyer stores in Oregon, Washington and Idaho several years ago.

Fourteen students and three adults were killed in Florida on Feb. 14 after being shot with a semi-automatic AR-15-style assault rifle. Authorities have said the weapon was purchased legally last year by the accused gunman when he was 18 years old.

Federal firearms law allows people aged 18 and older to buy “long guns”, including shotguns and rifles, and associated ammunition from licensed firearm dealers. The law restricts dealer sales of other guns, including handguns like pistols, and related ammunition to people who are 21 and older.

The National Rifle Association, which represents gunmakers and gun owners, opposes raising the minimum age for purchases of rifles or “long guns.”

Gun control supporters have other retailers in their sights.

An online petition calling for Academy Sports and Outdoors, based in Katy, Texas, to halt assault rifle sales had almost 8,000 signatures on Change.org by Thursday afternoon.

Walmart stopped selling assault firearms and accessories in 2015 and only sells handguns in Alaska. Dick’s said on Wednesday it would stop selling assault-style rifles and high-capacity magazines.