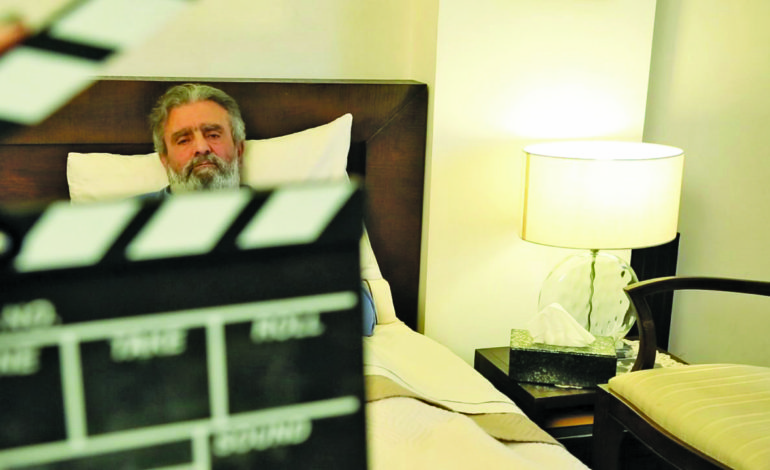 NEW YORK — The Lebanese movie “Yesterday Went with Yesterday”, written and directed by Los Angeles based Lebanese American filmmaker Issam B. Makdissy, will make its U.S. premiere when it opens at Cinema Village on March 16.

The story revolves around a Lebanese Canadian citizen’s past and future in relevance to Lebanon’s 1975-1990 civil war.

The lead character, Hamid (Mazin Saba) keeps vigil at his father’s deathbed as the father has fractured memories of the times when he was the head of a militia during the civil war, before escaping with his family to Canada.

The plot then delves into Hamid’s return to Lebanon — a land strange to him now — to connect with his family, with whom he lost touch since leaving Lebanon 35 years earlier. According to the plot synopsis on the “Yesterday Went with Yesterday” website, Hamid’s father wanted him “to take his soul” and to join it with his son Ramzi, who was 9-years-old when he was kidnapped and killed by an opposing militia as an act of revenge against his father. Hamid then learns about his culture and discovers stories about his past.

The cast of the movie was comprised of residents of Kfar Hilda, a town in Northern Lebanon. Issam Al Ashkar, who played the father, was the only professional actor on the set. Everyone else enacted their roles from their own knowledge of or personal experience from the civil war. “Even if you get Robert DeNiro or Bruce Willis or any other famous actor, no one would be able to act in this movie like the town’s own residents,” Makdissy said. “Many of the scenes were shot in people’s real homes and I would write the scenes as I go.”

Makdissy said that the movie has an “organic script”, where some scenes were shot in the bedrooms of the cast,

“We shot in real homes, trees, the beautiful forest in our town,” Makdissy said. “Everything and everyone in the town played a role in the film.”

The original music of the film was also composed and performed by people from Kfar Hilda. The film’s story is based on actual events.

Makdissy added that what inspired the movie was watching the dismantling of land mines in a nearby village.

“Years later, people are still afraid to walk into these areas because of the fear of stepping on land mines,” he said.

Makdissy earned a master’s degree in film from San Francisco State University, where he made his first feature film, “Liars Dice”, as his thesis. The film was awarded a gold medal at the Mannheim Film Festival.

“Lebanese cinema is coming out with lots of talent, where you’ll see talent ranging from actors to poets to singers and filmmakers,” Makdissy said when asked his opinion of the Lebanese cinema today, especially with a number of movies featuring plots that revolve around the civil war. “I am very proud of Lebanon.”

The movie will be shown at the Cinema Village in New York from March 16 to March 22.

“I would love to donate a special screening for students who would like to watch the movie,” Makdissy said.

He added that the  topic was powerful and made it easy to shoot with non-actors.

“We were comfortable,” he said. “It was a good journey and I am very happy with it. It took a village to make the movie.”