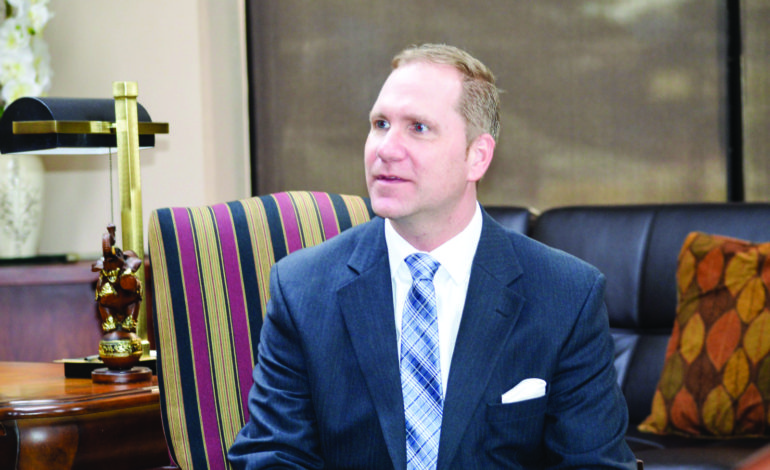 “Barbara McQuade did a fantastic job with community outreach. What I would like to do is continue with that tradition. I want to be accessible to people in the community.”

DEARBORN — In barely two months at his new job, Matthew Schneider, the U.S. attorney for the Eastern District of Michigan, has set the tone of his office.

Although his job is to prosecute criminals and he reports to President Trump, Schneider wants to make sure Metro Detroit’s multicultural communities know his office would pay special attention to protecting their civil rights.

“The strength of America is our diversity, and that’s what brings us together,” he told Arab American activists, lawyers and local law enforcement officials at BRIDGES meeting, a forum to quell concerns between them, in January.

Attorney General Jeff Sessions appointed Schneider to the position. He will serve for 120 days until a federal court reappoints him or President Trump officially nominates him and he’s confirmed by the Senate.

Former U.S. Attorney Barbara McQuade, who had been the head of the office since 2010, is among 46 federal attorneys and prosecutors who stepped down last March at Trump’s request. Since then, Daniel Lemisch, who’d been second in charge, had served as the acting U.S. attorney for the Eastern District.

“Barbara McQuade did a fantastic job with community outreach,” he told The AANews. “What I would like to do is continue along with that tradition. We have a lot of significant issues in the Metro Detroit area and I want to be accessible to people in the community.”

With fear at an all-time high in Muslim and immigrant communities due to a staunch anti-immigration stance by the White House, Schneider said that while the leadership changes every four or eight years, the commitment of the U.S. Attorney’s office to civil rights, diversity and protection of Michigan’s communities would not change. Schneider said that while Sessions’ positions can make for negative news headlines, federal prosecutors play an essential role for communities to thrive.

“I need them also to reach back to us and to explain to the law enforcement community in Detroit what the concerns are,” he said, adding that among his first visits in office was to the Arab American National Museum.

On Tuesday, the Supreme Court curbed the ability of immigrants held in long-term detention during deportation proceedings to argue for their release in a ruling in sync with President Trump’s approach toward immigration.

The ruling could lead to indefinite detentions of certain classes of immigrants, including some with legal status whom the government wants to deport.

The justices sent the case back to the Ninth Circuit Court to consider the question of whether the Constitution requires bond hearings for detained immigrants.

There are roughly 36,000 immigrants held in detention in the United States on any given day, and the ACLU estimates that about 10 to 20 percent have been detained at least six months.

Schneider said his office is not actively involved in cases like administrative removals of unlawful residents. Instead, his priorities are fighting violent crimes, gangs, corruption and terrorism.

“We have directed our team; we are full steam ahead on Ceasefire and Detroit One,” Schneider said. “We are not gonna lift our foot off the gas – we can’t. This will not work without community engagement.”

But federal prosecutors and law enforcement officers might not have the easiest time reaching out to largely immigrant communities like Dearborn.

“There has been a no-snitch type of mentality,” he said. “I’ve met with victims of crime who do not want to come forward; I’ve meet with victims of sexual assault who do to want to come forward. It’s very difficult and personal to them, and that can be very hard to break that mentality. But I firmly believe that if you see something, you should say something about it. Because we can’t do our jobs if we don’t have that type of information.”

Leaked intelligence documents obtained in 2014 by The Intercept showed that Dearborn, with a high concentration of Arab Americans and population of 95,000, had the second highest number of residents on the “Terrorist Screening Database”, the U.S. government’s watchlist of “known or suspected terrorists” that is used by multiple agencies, including the FBI.

Schneider strongly voiced his support for due process and a more just way of obtaining redress for those unjustly added to the list, but said he hadn’t heard of the issue before.

“I can speak to the heads of the FBI or the INS,” he said. “We can have the dialogue. But until you and I have spoken about this today, no one else had really raised this issue to me before.”

He was appointed by the Michigan Supreme Court’s justices as their chief of staff and general counsel in 2011 and served in that position until 2013. He subsequently served as chief legal counsel for the state until 2016.