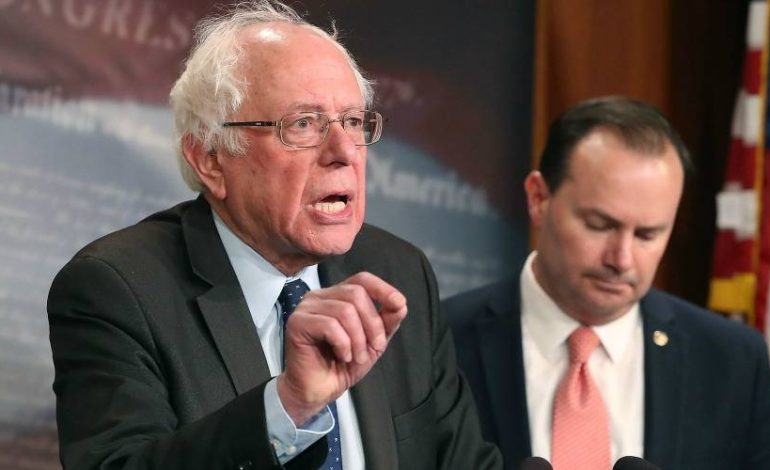 Senators Bernie Sanders, Mike Lee and Chris Murphy said in a joint statement, that they submitted a draft which will allow, for the first time, the Senate to vote to “withdraw American troops from an unauthorized war”.

WASHINGTON – Three senators will attempt to use congressional authority to get the United States to pull out of Saudi Arabia’s war in Yemen.

Republican Mike Lee of Utah, Democrat Christopher S. Murphy of Connecticut, and independent Bernie Sanders of Vermont will attempt to use a provision in the 1973 War Powers Act, Reuters reported.

The provision allows any U.S. senator to introduce a resolution to withdraw from a conflict that has not been authorized by Congress.

“We believe that, as Congress has not declared war or authorized military force, this conflict (in Yemen) is unconstitutional and unauthorized,” Sanders said at a conference.

Senate Majority Leader Mitch McConnell did not respond to Reuters for comment about how the resolution would move forward.

“This horror is caused in part by our decision to facilitate a bombing campaign that is murdering children, and to endorse a Saudi strategy inside Yemen that is deliberately using disease and starvation and the withdrawal of humanitarian support as a tactic,” Murphy said in a statement.

Lee’s statement was mainly focused on the powers of Congress being “willfully eroded.”

“Successive presidents have claimed that power-and the politicians in Congress have been only too happy to give it away, in order to avoid tough votes,” he said in a statement.

The United States has backed Saudi Arabia in its fight against Houthis in Yemen and in an attempt to reinstall president Abd-Rabbu Mansour Hadi.

But members of Congress like Murphy have long been critical of the toll it has taken on civilians and how it is verging on a humanitarian crisis.