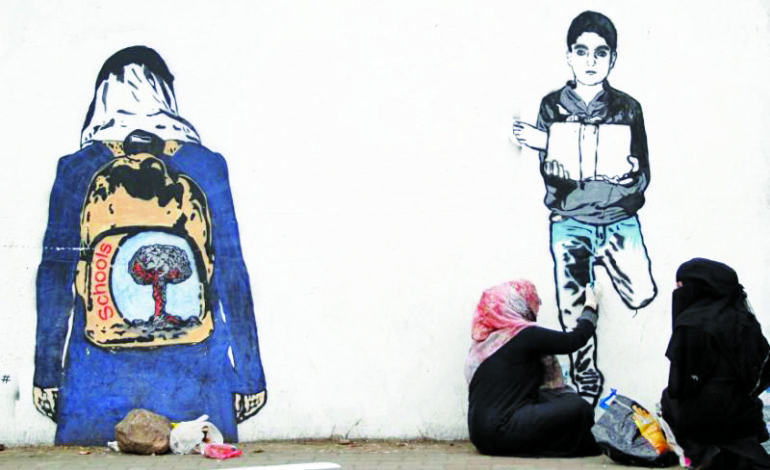 An artist paints a mural as part of a campaign to depict the suffering of women and children in the war-torn Yemen, in Sanaa, Yemen Mar. 1 - Photo by Reuters

Her latest mural, portraying a one-legged casualty of a landmine, is one of many Subay has done in the capital Sanaa during the war, which has killed thousands, driven many more from their homes and wrecked the Arab country’s economy.

“This drawing is called ‘Just a leg’ and it’s part of the campaign called ‘Silent Victims'”, she told Reuters.

“This is the sixth artwork of this mural campaign. The murals portray war victims in general, especially the victims of landmines, which are being planted everywhere in Yemen.

Subay has already painted murals to highlight people who have disappeared, the shortages of water, destruction of schools, displacement and the exploitation of schools for military purposes.

Subay said the mural campaign was aimed at stopping the war between the internationally recognized government, which is backed by a Saudi-led military coalition, and the Iran-aligned Houthi movement, which controls the capital.

“My message is one of peace. Women and children are the most affected by this war and no one cares about them. War is pointless, it has targeted everything in Yemen; there’s nothing left,” she added.