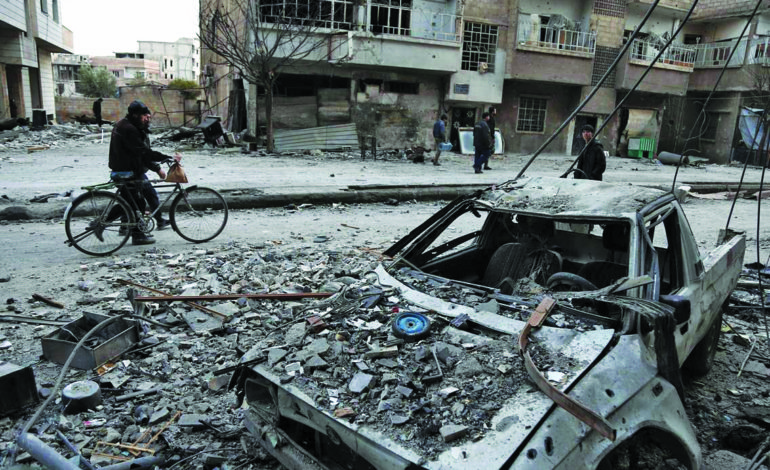 GENEVA — A Russian plan for a five-hour pause in fighting in Syria’s eastern Ghouta needs to be expanded to allow aid deliveries to enter and civilians and urgent medical cases to leave, United Nations officials said on Thursday.

In one of the fiercest onslaughts of Syria’s seven-year civil war, hundreds of people have died in 11 days of bombing of eastern Ghouta, a swathe of towns and farms outside Damascus. Tthat is the last major rebel-controlled area near the capital.

The Syrian army and its allies launched ground assaults on the edge of eastern Ghouta on Thursday, backed by a bombardment the Syrian Observatory for Human Rights said killed 11 people.

“You are failing to help us help civilians in Syria,” U.N. humanitarian adviser Jan Egeland told diplomats from 23 states attending a weekly meeting in Geneva.

Some 400,000 people trapped in government-besieged eastern Ghouta need life-saving aid, and the only convoy allowed so far this year was a small one in mid-February with aid for just 7,200 people, Egeland said.

U.N. satellite analysis has shown significant damage across much of eastern Ghouta since Dec. 3, though the enclave has been subjected to regular bombardment throughout the conflict.

Russia, a strong ally of Syrian President Bashar al-Assad, has called for daily five-hour local ceasefires to establish what it calls a humanitarian corridor so aid can enter the enclave and civilians and wounded can leave.

But the first such truce on Tuesday quickly collapsed when bombing and shelling resumed after a short lull.

“We were not involved in the talks that led to the declaration of a five-hour pause. And if we had been we would say that it is not enough,” Egeland said.

Egeland said a “two-way” humanitarian corridor was needed, with several convoys each week into eastern Ghouta, while 1,000 priority medical cases must be evacuated for treatment.

Moscow, which says the rebel groups based in eastern Ghouta are terrorists and not covered by the U.N. resolution, said they had stopped people leaving by attacking a safe route out of the enclave.

The rebel groups, which have said they would accept a full ceasefire, deny preventing civilians leaving the area. They say people fear arrest or conscription despite Russia’s pledges that any who surrender to the Syrian government would be safe.