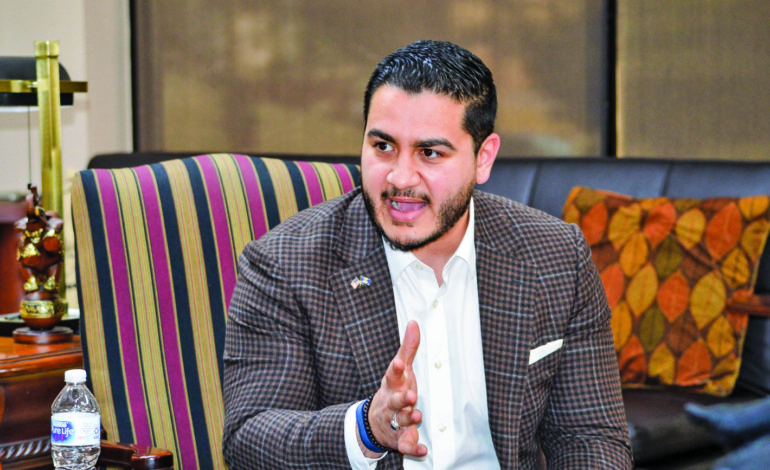 DEARBORN — He’d never thought politics would be in the cards for him, but Abdul El-Sayed is the first Democratic candidate to submit required signatures to the state, inching closer, aspiring to become Michigan’s first Arab and Muslim American governor.

On March 6, El-Sayed, 33, a physician and epidemiologist and former director of the Detroit Health Department, stood in front of the Secretary of State’s office in Lansing, surrounded by volunteers, ready to file 24,000 signatures they’d gathered from every congressional district in the state –9,000 more than needed to be included on the ballot in the primary election.

“This is what people power looks like,” he told reporters.

We have a responsibility to stand up and demand that America is in fact embracing of the diversity we know is in communities like this one.

When El-Sayed graduated from the University of Michigan in 2007, that feat would have surprised him. Yet it was an encounter with former President Clinton at graduation that ultimately inspired him to run for office.

At the office of The AANews, where he sat for an exlusive interview, he recalled meeting with Clinton after giving his speech as class valedictorian and after the former president had also spoken.

El-Sayed said Clinton asked about his plans to go into medical school and told him he had a gift for communicating. He said the former president hoped El-Sayed would one day consider running for office.

With anti-Muslim sentiments prevaileing just six years after the September 11 attacks, the Egyptian American said he told Clinton he loved science and helping people, but politely scoffed at the thought of somebody with 11 letters in his first name, “Abdulrahman”, could be elected.

A number of factors influenced El-Sayed’s ultimate decision to run for office, including seeing Flint’s children being poisoned due to deteriorating infrastructure and Donald Trump’s election to the presidency.

El-Sayed and his wife had also recently welcomed a baby girl into their lives, and the candidate said he thought about the world she would grow up in.

“I had to ask myself what’s my responsibility to this moment,” he said, adding that he knows what it’s like to grow up and see lawmakers who don’t look or pray like him make decisions about his life.

“We have a responsibility to stand up and demand that America is in fact embracing of the diversity we know is in communities like this one,” he said. El-Sayed said he was lucky to be brought up in a diverse household, being raised by his father, Mohamad, an immigrant from Alexandria, Egypt and his stepmother, Jackie, who was born and raised in Gratiot County, Michigan.

Born and raised in the state, El-Sayed said he’s come to know that Michiganders are “really good people” who don’t ask much how a candidate prays, but what they pray for.

“When people realize that you’re asking about the issues that matter, about how you can make their lives better, you really can inspire them to think differently about who leaders should be,” he said.

To be assured of that claim, the campaign conducted a study that found more than half of hateful messages left on its website and Facebook page originated from Florida, while less than seven percent came from Michigan, according to Max Glass, El-Sayed’s campaign manager. A total of 28 individuals from Michigan left hateful comments.

Still, the Muslim American candidate is running in a purple state that elected President Trump by 10,000 votes and is up against Democratic and Republican rivals like former State Senate minority leader and former State Rep. Gretchen Whitmer and Michigan Attorney General Bill Schuette, both of whom have raised more money than El-Sayed.

But El-Sayed said he knows that voters, especially young people, are looking for something different in their politics and that he’s betting on contributing to the momentum ignited by Barack Obama in 2008 and 2012 and Senator Bernie Sanders (I-VT) during the 2016 presidential elections.

Sanders, a Jewish American, won Dearborn, a city with a high concentration of Arab Americans, in the Democratic primary, earning 63 percent of the votes, while Hillary Clinton received 37 percent.

“What we offer is the unique opportunity to take a progressive message,” El-Sayed said. “To couple it with skill sets that I bring a physician and former health commissioner and with an amount of youth engagement that I think is really unique on a national scale.”

He added that about 50 percent of attendees at his speaking engagements subsequently join his campaign as volunteers. The campaign currently has about 2,800 volunteers, including 300 interns. About 8,500 financial backers from almost every state have helped the campaign raise more than $2 million. Publisher Osama Siblani speaks to El-Sayed during an interview at The AANews, February 28 – Photo by The AANews

El-Sayed said the most encouraging aspect of the campaign so far has been watching young people “of all stripes and colors” see themselves in his candidacy, just as he saw similarities between himself and Obama.

“We’ve been able to marshal a community of young people who are excited about what politics can look like and they see that represented in this campaign,” he said. “It’s not time for us to hide; it is time for us to stand up and demand that we get to belong like everyone else, because our values dictate the same we would want for everyone else.”

He said his confidence grows every day that he can win the race with considerable room to spare, because voters are paying closer attention to a candidate’s messaging and rejecting corporate influence in their politics.

He called Schuette a “craving usurper of power” who’s only interested in staying in power, not about the people he serves.

“I’m confident that if I’m the nominee, we don’t just beat Bill Schuette, we thump Bill Schuette in November,” he said.

El-Sayed said that as he tours the state, Michiganders are seeking a makeover to the face of their politics – one that unites people over solutions to problems, instead of partisanship and polarization on issues.

People are asking the same basic questions about maintaining an economy that provides a steady income and promotes job growth, access to quality education and healthcare and improving the state’s deteriorating infrastructure, he said.

El-Sayed said he speaks to residents about passing a single-payer universal healthcare program, raising the minimum wage to $15 an hour, rebuilding schools, providing access to clean water in a state that’s surrounded by 21 percent of the world’s fresh water, shutting down a major oil pipeline to protect the Great Lakes and bolstering investments in water and road infrastructure.

On the campaign trail, El-Sayed has heavily criticized both his former boss, Detroit Mayor Mike Duggan, and Gov. Snyder for their policies and poor leadership that he said lead to many of the state’s crises.

El-Sayed said he didn’t ask for Duggan’s “blessing”, but he did ask for his advice.

He said Duggan’s choice to back Whitmer and his accepting money from the same donors who support both shows that the same system of politics that fostered the mayor is trying to get his opponent elected.

“That is exactly the same system of politics that I oppose,” he said.

El-Sayed added that he respects Duggan’s competence and abilities but disagrees with his values and stance on issues, including the city’s decision to shut off water to households that could not afford it. He also said the demolition program is causing lead poisoning.

“There have been a number of people from that administration who have jumped out and run for office and he hasn’t supported any of them,” he said of Duggan. “I think that speaks a little bit to the way he thinks about how people who have worked with him should be able to move.”

El-Sayed acknowledged that drivers in Michigan are too often frustrated by the deteriorating conditions of the roads. He said they spend an average of $540 a year to repair their cars, as 29 percent of roads and 37 percent of bridges don’t meet basic competency criteria.

He likened the state’s ineffective short-term funding strategy of temporarily patching potholes to repeatedly covering a serious cut with a band aid, rather than using stitches.

He said lawmakers have become de-incentivized from funding large projects because the government funds itself annually through a budget. For example, resurfacing projects that could take about seven years are threatened with cuts during the third year by a changing administration that has set different priorities.

El-Sayed’s campaign proposes a “pure Michigan infrastructure bank” that would both pay for a project over the long term and leverage private investment.

“We haven’t had the funding to actually think innovatively about the way we do this, and it’s time we did,” he said.

If Michigan is going to have an economic future, it’s because we’re investing in our people and that means investing in education.

Michigan faces many challenges, but education reform could be the answer to most of them, per El-Sayed’s plan. Securing better futures for Michigan’s youth means ensuring a stronger economy, and highlighting trade and skill-based education can pave the way for workers to rebuild a frail infrastructure.

As Detroit’s health commissioner, El-Sayed personally inspected public schools, where he saw dead mice in corners and broken gym floors because of the mold growing underneath.

He attributed schools’ failing infrastructure and poor-quality education in some districts to how little the state invests in students, teachers and buildings.

El-Sayed said Michigan’s education system has been “fundamentally robbed” by lawmakers who underwrite welfare for corporations in hopes of creating jobs, but have instead offshored and automated most it.

“If Michigan is going to have an economic future, it’s because we’re investing in our people and that means investing in education,” he said.

He said on average, Michigan invests less per student per year than any other Midwestern state and that there is a $718 funding gap between what the state will give a high-income school district versus a low-income one.

Those low-income communities also do not have the means to invest in maintaining school buildings, so El-Sayed proposed to use the infrastructure bank to buy unused schools and invest the money back into the schools they use.

“We’re not doing enough of the wrap around services that we need for our students to be able to thrive,” he added.

That starts with being able to give children free eye glasses to see the blackboard, an effort he lead as health commissioner, but it also means being able to invest in counselors and librarians.

The proportion of librarians in Michigan schools has dropped by 63 percent since he graduated from public school, he said. The student-to-counselor ratio is 700 to 1, while the national average is 491 to 1.

He added that only about 35 percent of high school students go onto college and that he wants to ensure higher education becomes more affordable.

His plan is to make college free for any student living in a household earning less than $150,000 a year.

He also doesn’t want to leave out the 65 percent of students who will not attend a traditional four-year college by combining “the best of in-class learning through a community college, the best of on the job training through our unions and apprenticeships and put them together in credentialed one and two-year programs.”