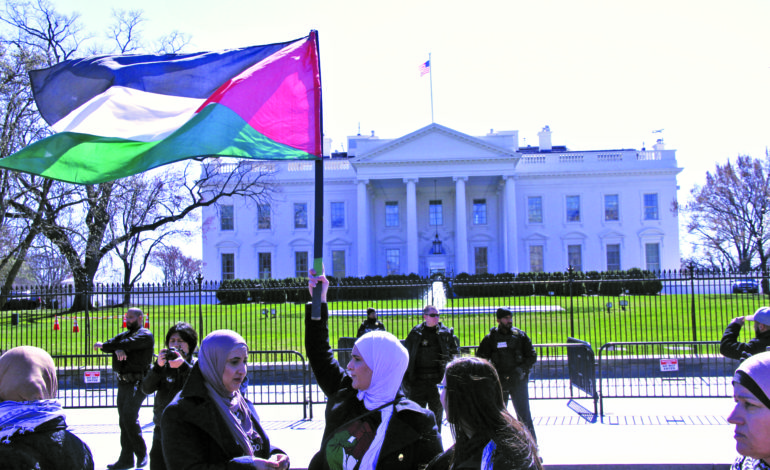 A protester raises the Palestinian flag in front of the White House in Washington D.C., March 4

WASHINGTON D.C. — On March 4, hundreds chanted “Free, Free Palestine” as they marched from the north lawn of the White House to the Walter E. Washington Convention Center, where the American Israel Public Affairs Committee (AIPAC) held its annual policy conference.

AIPAC’s website describes the conference as, “the largest gathering of America’s pro-Israel community.”

Abbas Hamideh of Al-Awda and the ANSWER (Act Now to Stop War and End Racism) Coalition both organized the protest.

According to Brian Becker of the ANSWER coalition, the protestors applied for a permit to be in Lafayette Park, but encountered problems.

When the group met in Lafayette Park at noon, authorities said they could meet on Pennsylvania Ave. just north of the White House. At around 1 p.m., however, the group was told to move.

“What’s happened right now is that the Secret Service is telling us that we have to move off of this area,” Becker told the crowd. “Whenever we’re having demonstrations and the media is here and the backdrop is the White House they then make the argument that this is a national security matter and as a consequence we have to move.” Demonstrators carrying banners in support of Palestine march from the White House to the site of the AIPAC Policy Conference in Washington, D.C., March 4

Rich Siegel is a freelance musician and American Jew who attended the protest. He said he grew up as a Zionist Jew and that he’d visited Palestine in October.

“I was raised Jewish and Zionist,” Siegel said. “I was a teenage Zionist youth group president. I would say to other Jewish Americans, educate yourselves.”

He said there is an entire generation of Jewish Israeli revisionist historians who have written about the truth of this issue.

“I consider myself a cult survivor,” he said. “We’ve been lied to all our lives about this issue. It’s a horror and it’s a horror that my people here in the United States are supporting.”

He added that this is an ongoing tragedy.

“We will never accept this occupation,” Weiss said. “We pray to God every day for the speedy and God hopeful peaceful dismantlement  of this unacceptable occupation that is not a Jewish state; it is a Zionist state.”

Eugene Puryear of the ANSWER coalition said the protestors were there to state as Americans that they don’t support what’s being done in their name.

“The Palestinian struggle in the United States is so skewed that it’s groups like AIPAC that spend tons and tons of money and use all the political influence to confuse people and distort reality,” Puryear said. He added that he thinks the most effective way to solve the conflict is to support the Boycott, Divestment, Sanctions (BDS) movement.

“The progressive narrative from Israel is just as compelling and critical as the conservative one,” Friedman said. “There are very real forces trying to pull you out of this hall and out of this movement, and we cannot let that happen.”

“I don’t see there [ever] being a peace process,” a protestor told The AANews. “There is more violence over in Palestine every day.”

Joshua Novograd, a first time AIPAC attendee from Baltimore, said that while he doesn’t agree with the protestors’ views he thinks the protest is good if people can have productive conversations.

Novograd said he was there to hear AIPAC’s policy for the first time and see if it makes sense to him.

A women-led group called CODEPINK attended the protest in support of Palestine. A woman from the group said it opposes militarism.

“We’re here calling for an end to U.S. support for Israel’s policies of Apartheid,” she said. “There are two sets of laws for two groups of people. It is separate and unequal and it is time for it to end.”

A South African immigrant told the AANews that she grew up during Apartheid in that country. As a flight attendant in the 1980s she flew to Israel and began to notice things similar to what she noticed in South Africa.

“They believe the narrative that is false that the Palestinians want all the Jews dead,” she said when asked why AIPAC member may not understand the Palestinian viewpoint. “In my opinion I’ve heard a lot of reasonable viewpoints from the Palestinians that will tell me they just want human rights.”

-Hassan Khalifeh contributed to this report.