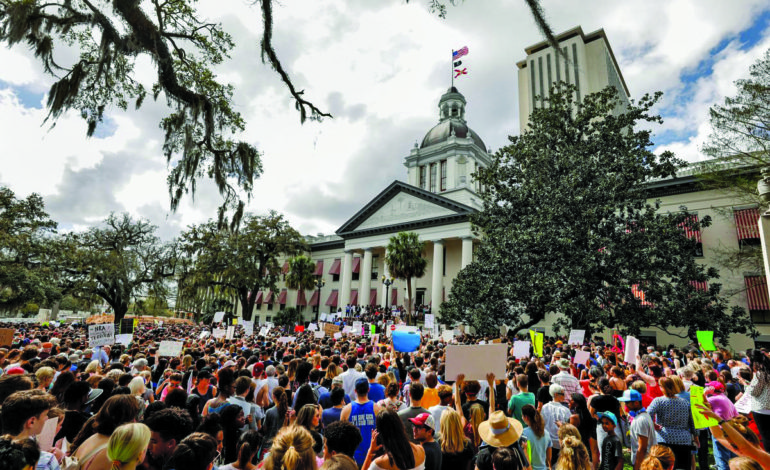 TALLAHASSEE — Florida lawmakers, spurred by last month’s deadly high school shooting, gave final passage on Wednesday to a bill to raise the legal age for buying rifles, impose a three-day waiting period on all gun sales and allow the arming of some school employees.

Swift action in the Republican-controlled State House, where the National Rifle Association (NRA) has long held sway, was propelled in large part by the extraordinary lobbying efforts of young survivors from the massacre three weeks ago at Marjory Stoneman Douglas High School in Parkland.

But the legislation, while containing a number of provisions student activists and their parents had embraced, left out one of their chief demands – a ban on assault-style weapons like the one used in the Feb. 14 rampage.

The bill overcame strenuous objections to provisions permitting school staff to carry guns on the job. Critics say that will pose a particular risk to minority students, who they say are more likely to be shot in the heat of a disciplinary situation or if mistaken as an intruder.

Still, a group of families of victims and survivors of the shooting applauded the legislation’s passage in a message posted on Twitter by parent Ryan Petty, whose daughter was among those killed, and urged Republican Governor Rick Scott to sign it.

The measure will automatically become law within 15 days unless vetoed by Scott, who said on Wednesday prior to the vote that he had not yet decided whether to support the bill.

The bill’s passage signaled a possible turning point in the national debate between gun control advocates and proponents of firearms rights enshrined in the Second Amendment of the Constitution.

The measure narrowly cleared the state Senate on Monday before passing in the House of Representatives on Wednesday in a 67-50 vote. Ten House Democrats joined 57 Republicans in supporting the bill, while 19 Republicans and 31 Democrats voted against it.

The action by Florida’s lawmakers represented both a break with the NRA on gun sale restrictions and a partial acceptance of its proposition that the best defense against armed criminals is the presence of “good guys with guns.”

The bill would create a program allowing local sheriffs to deputize school staff as volunteer armed “guardians”, subject to special training, mental health and drug screening and a license to carry a concealed weapon. Each school district would decide whether to opt in.