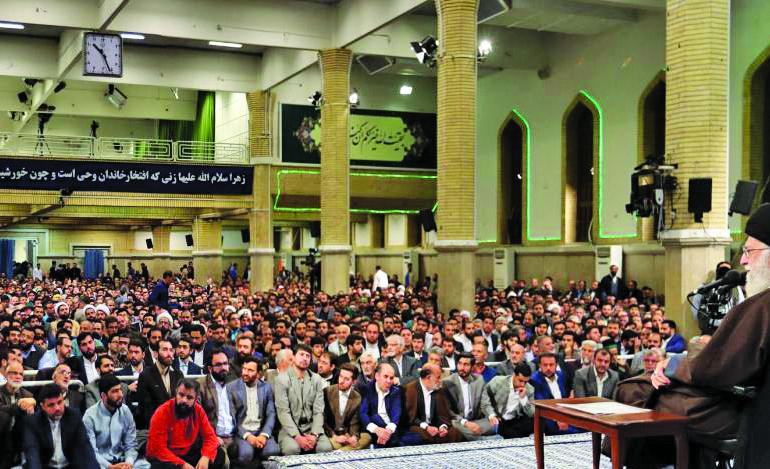 TEHRAN/PARIS — Iran will not negotiate with the West over its presence in the Middle East, Supreme Leader Ayatollah Ali Khamenei said on Thursday, a few days after France’s visiting foreign minister sought to raise Tehran’s role in regional conflicts.

Jean-Yves Le Drian flew to Tehran on Monday with a brief to reaffirm European support for a 2015 nuclear deal that opened up Iran’s economy while echoing U.S. concern about Tehran’s missile program and its influence in the region.

“European countries come to Tehran and say we want to negotiate with Iran over its presence in the region. It is none of your business. It is our region. Why are you here?” Khamenei was quoted as saying by his official website.

Khamenei said the Islamic Republic would only negotiate on that issue with other states in the region.

Iran’s Revolutionary Guards have sent weapons and thousands of soldiers to Syria to prop up the government of President Bashar al-Assad in the country’s seven-year-long civil war. Israel has accused Tehran of seeking a permanent military presence in Syria.

Khamenei described the presence of U.S. military forces in various regions of the world as “malicious and seditious” and said Iran would not ask for permission from Washington to be active in the Middle East.

“We will negotiate with America when we want to be present in America,” he said.

President Trump has threatened to pull Washington out of Iran’s nuclear agreement with world powers, forged before he took office, unless three European signatories help “fix” the accord by forcing Tehran to limit its sway in the Middle East and rein in its ballistic missile program.

French President Emmanuel Macron has criticized the program and raised the possibility of new sanctions.

Iran has one of the Middle East’s largest missile programs and some of its precision-guided missiles have the range to strike Israel.

Israeli Prime Minister Benjamin Netanyahu discussed Tehran’s military activities in the region with Trump during his visit to Washington this week.

President Hassan Rouhani said on Wednesday that Iran’s military might posed no threat to any country in the region.

“Our weapons are meant to promote peace, strengthen stability and security and to prevent others from invading our country. No one should be concerned about Iran’s weapons and missiles,” Rouhani was quoted as saying by the state media.