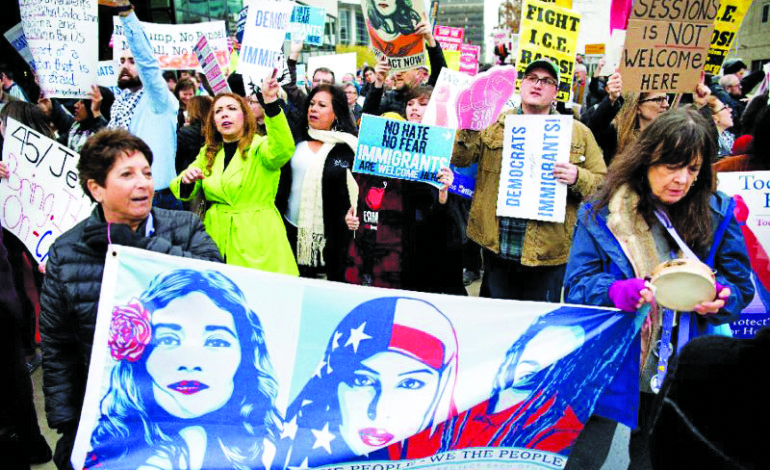 Californians protest outside a speech by Attorney General Jeff Sessions in Sacramento, California - Photo by Reuters

WASHINGTON/SAN FRANCISCO — The Justice Department sued the state of California over so-called “sanctuary” policies that try to protect illegal immigrants against deportation, ramping up a confrontation over whether local police should enforce federal law.

The issue of illegal immigrants has become increasingly heated since Donald Trump became president last year and signaled that he planned to target a wider swath of people for deportation.

Trump’s attorney general, Jeff Sessions, has made combating illegal immigration one of his top priorities since taking over the helm of the Justice Department in February 2017. A key part of that effort involves a crackdown on primarily Democrat-governed cities and states that Sessions claims are “sanctuaries” that protect illegal immigrants from deportation.

The lawsuit cites a provision of the Constitution known as the “Supremacy Clause,” under which federal laws trump state laws.

California Attorney General Xavier Becerra said on Tuesday law enforcement in the state is focused on public safety, not deportation. The Trump administration’s legal arguments are similar to those it has made in other cases, he said, and his office is prepared to address them.

At issue is whether sanctuary cities are violating a federal law that requires them to share information about people they arrest with the U.S. Immigration and Customs Enforcement agency.

One case is now on appeal, after a federal judge in San Francisco blocked Trump’s executive order to block funding to sanctuary cities.

Similar kinds of cases are under way in other parts of the country, including a case on appeal in Chicago after a federal judge issued a nationwide injunction barring the government from blocking grant money typically used to help local police combat violent crime and help victims.