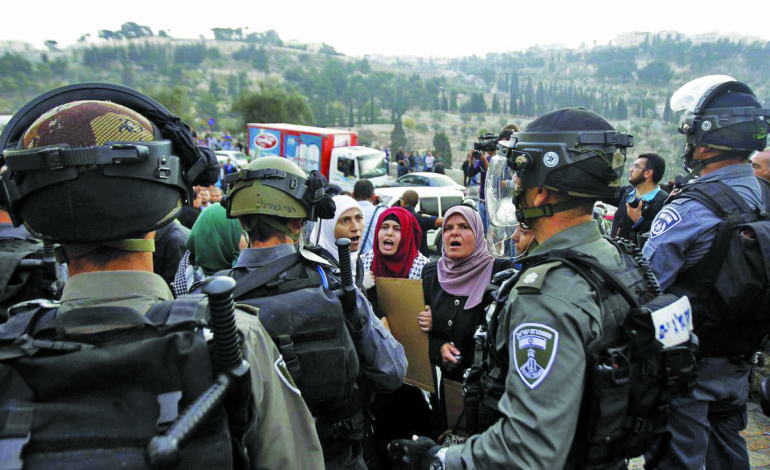 March 8 is International Women’s Day, a time to commemorate the movement for women’s rights and raise awareness of some of the challenges confronted by women around the world.

Living under a 50-year-long Israeli military occupation, Palestinian women in the West Bank and Gaza face more challenges than most. Their husbands, brothers and sons frequently imprisoned, their homes demolished, their residency permits revoked and daily restrictions imposed upon their movement, you could be forgiven for thinking life had left Palestinian women defeated. Yet their story is one of resilience, sumud and strength, reinforcing the central importance of women to Palestinian society and their resolve to #PressForProgress.

On December 15, 2017, a Palestinian teenager was filmed slapping an Israeli soldier standing on her family’s front yard. The video quickly went viral, causing uproar in Israel over the affront to the soldier’s authority and cheers of support from advocates of the Palestinian cause. The teenager was of course Ahed Tamimi, the now world-famous activist from Nabi Salih in the occupied West Bank, who has been compared to Joan of Arc and Anne Frank. As Tamimi turned 17 on January 31, South Africans gathered to celebrate her birthday and hundreds of young American Jews sent birthday cards to the jailed teen. With the detention of Ahed and her mother, Nariman, extended until March 11, their fate remains unknown.

Ahed and Nariman are just two of the more than 15,000 women arrested since the Israeli occupation began in 1967. Since the outbreak of the Jerusalem Intifada on October 1, 2015 alone, Israeli forces have arrested around 445 Palestinian women. A case in point is Khalida Jarrar, a feminist and human rights activist and member of the Palestinian Legislative Council, who was arrested in 2015 and again in 2017. Jarrar was held in administrative detention and her six-month detention was renewed again in December 2017.

Many of those young women arrested are minors. With a UNICEF report suggesting that “every 12 hours, a Palestinian child is detained, interrogated, prosecuted and/or imprisoned”, the role of a mother in occupied Palestine is particularly difficult. This is a theme recently explored by British-Palestinian filmmaker Farah Nabulsi in her short film “Today They Took My Son.” Telling the story of Khalid, a young boy arrested for throwing stones at Israeli occupation forces assisting a house demolition, the film is narrated by Khalid’s mother as she asks how, “they who have taken everything else” could take her son away. Her words, “I know the Earth will keep spinning around my pain, ignorant of all that has now changed in my world” highlight the fact that, save for the few headline-grabbing stories like that of Ahed Tamimi, the plight of most Palestinian women goes unnoticed by the world on a daily basis.

Yet, in the face of this adversity, Palestinians living under occupation remain some of the most resilient women to walk the face of the Earth. Historically, women were portrayed by early Palestinian nationalist movements as the mothers of martyrs and the womb of the nation, a theme which recurred in art, cinema and poetry. However, the central roles undertaken by women during the intifadas, and their importance for holding together those communities in which the men have been arrested or killed, has recast them as active agents of change and resistance.

The other day in Gaza, thousands of women took to the streets in an attempt to shed light on the issue of incarcerated women, as well as their right to work and gain access to healthcare and education. Taking place in multiple locations across the Strip, the marches eventually met in front of the United Nations office, calling for the 63 prisoners in Israel’s Hasharon and Damon prisons, including sick mothers, 10 minors and eight wounded, to be freed.

This International Women’s Day, as the UN and other international institutions call on women, and indeed men, from all corners of the globe to recognise the challenges still facing women today, the resilience of Palestinian women should be a source of inspiration. Fighting pervasive challenges to their daily existence, their spirit can act as an example of how to display strength in the face of hardship, and to do so with pride and grace.

-Rebecca Stead is an MA student at SOAS University of London studying Middle Eastern Studies with Arabic. Stead focuses on the history, culture and politics of Israel-Palestine specifically and the Levant more broadly. She has travelled in the region and studied Arabic in Jerusalem and Amman, and works in a freelance capacity for a number of journals and blogging platforms.