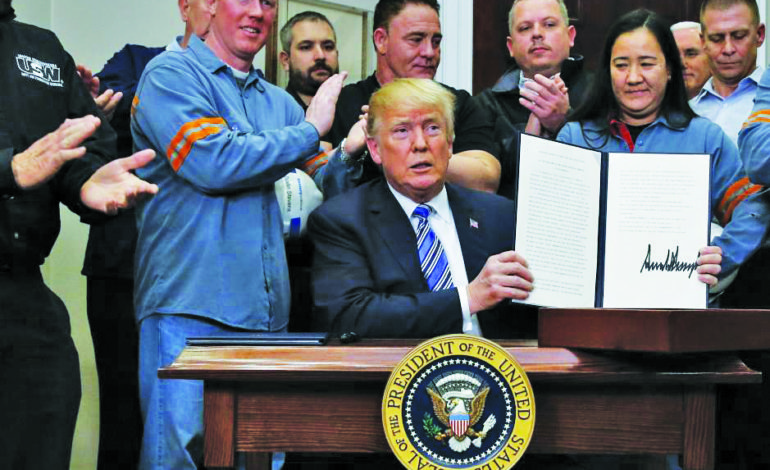 President Trump signs a proclamation placing tariffs on steel and aluminum imports while surrounded by workers from those industries at the White House in Washington, D.C., March 8 - Reuters

WASHINGTON, D.C. — President Trump pressed ahead on Thursday with import tariffs of 25 percent on steel and 10 percent for aluminum, but exempted Canada and Mexico and offered the possibility of excluding other allies, backtracking from an earlier “no-exceptions” stance.

Describing the dumping of steel and aluminum in the U.S. market as “an assault on our country”, Trump said in a White House announcement that the best outcome would for companies to move their mills and smelters to the United States. He insisted that domestic metals production was vital to national security.

“If you don’t want to pay tax, bring your plant to the USA,” said Trump, flanked by steel and aluminum workers.

Plans for the tariffs, set to start in 15 days, have stirred opposition from business leaders and prominent members of Trump’s own Republican Party, who fear the duties could spark retaliation from other countries and hurt the U.S. economy.

Within minutes of the announcement, Republican Senator Jeff Flake, a Trump critic, said he would introduce a bill to nullify the tariffs. But that would likely require Congress to muster an extremely difficult two-thirds majority to override a Trump veto.

Some Democrats praised the move, including Senator Joe Manchin of West Virginia, who said it was “past time to defend our interests, our security and our workers in the global economy and that is exactly what the president is proposing with these tariffs.”

Trump’s unexpected announcement of the tariffs last week roiled stock markets as it raised the prospect of an escalating global trade war. He appeared to have conceded some ground after concerted lobbying by Republican lawmakers, industry groups and U.S. allies abroad.