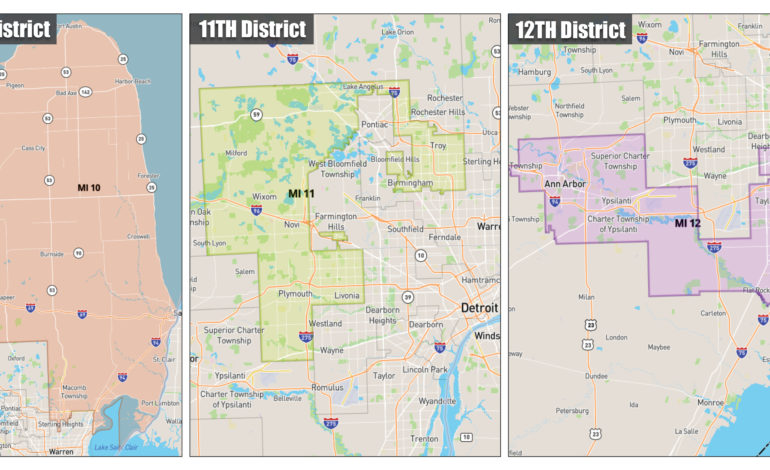 Mitchell of Dryden, replaced former U.S. Rep. Candice Miller in 2016 and has since created a system of private medical education centers. In March, Mitchell along with Congressman Bradley Byrne (R-AL) introduced a fundamental reforming legislation that offers solutions to the broken Congressional budget process in order to control spending and efficiently reduce the national debt.

U.S. Rep. David Trott (R-Birmingham) has announced that he won’t run for a third term, leaving his seat open. Six Republicans and five Democrats are vying for his seat.

A former educator and Army national guardsman, Bentivolio was elected U.S. Rep. in 2012, with support from the Tea Party, but lost to Trott in the 2014 primary. He ran again as an Independent in 2016.

Bonds is a small businesswoman from West Bloomfield with a mission to raise funds to fight opioid addiction. She is also the daughter of the late Detroit broadcaster Bill Bonds, and she cites her father’s work to boost her first political campaign.

Epstein, whose campaign goals include increasing jobs, is a third-generation co-owner of the Southfield-based Vesco Oil Corporation, a certified Women Business Enterprise, which distributes automotive and industrial lubricants.

Term-limited State Rep. Klint Kesto (R-Commerce Township), the first Chaldean elected to that body, is running to bring “conservative change to Congress.” His Facebook page cites his fight against opioid epidemic and his efforts in bringing about change for a more effective government.

Term-limited State Sen. Mike Kowall (R-White Lake), who’d previously served in the State House from 1998-2002 and has also been a White Lake Township supervisor, had considered a run for secretary of state before announcing his candidacy in February. According to his campaign website, his efforts to help the economy have helped drive down unemployment in Michigan to its lowest rate in 18 years and create 500,000 jobs.

Raczkowski is a former state representative and retired Army Reserves lieutenant colonel from Troy. He runs an automotive and defense logistics company. With a conservative approach, he aims to improve the economy and limit the size of government.

Term-limited State Rep. Tim Greimel (D-Auburn Hills), a former Oakland County commissioner and member of the Rochester School Board. According to his campaign website, he views good education as the key to economic opportunity and upward mobility. During his tenure in Lansing, he worked to raise the minimum wage and led Democratic efforts to provide structure and accountability to the Detroit bankruptcy.

Prior to his election to the State House, he practiced employment and civil rights laws. His clients included whistleblowers and others who received unfair treatment from their employers.

Gupta of Novi is a former vice president of Groupon. He also co-founded a firm that uses technology to reduce medical costs. According to his website, he is fighting for “Better Jobs, Better Wages and Better Skills” for Michiganders.

An entrepreneur and attorney based in Birmingham, Haberman was general counsel of his late brother Jeremy’s Ferndale-based live music venue, the Magic Bag. He also led an effort to fight for smoke-free air in most public establishments in the state.

He stated in a campaign video that Michigan needs “strong, fact-based leaders.”

A former chief of staff for the U.S. Treasury Department’s Auto Task Force, Stevens, of Rochester Hills, was present during the time the department gave billions to General Motors and Chrysler through bankruptcy restructuring. For her campaign, she cites her previous work in leading programs for workforce development and digital manufacturing. She aims to bring high-tech jobs to Michigan.

Saad of Northville worked in the Department of Homeland Security and helped coordinate the response to the gulf coast oil spill in 2010. She also worked with Detroit Mayor Mike Duggan as the director of immigrant affairs.

According to her website, important issues include growing the economy, health care, putting the American Dream within reach, education, immigration reform, national security, women’s rights and a livable planet for all.

U.S. Rep. Debbie Dingell (D-Dearborn) is a member of the state’s congressional delegation. She has worked to push for trade deals that help Michigan workers, promote the auto industry, and protect environmental resources as well as senior citizens.

A resident of Taylor with a  background in sales and marketing, Jones’ platform includes the economy, education and healthcare. His goals include reforming the latter two as well as making changes to U.S. immigration policy. He also advocates “Constitutional awakening”, saying the Constitution’s tenets have been ignored.

Young of Dearborn uses a GoFundMe page to raise funds for his campaign. He says on his Facebook page that he aims to increase taxes on the rich, lower education costs and create manufacturing and skilled labor jobs.

Tlaib is a public interest lawyer and former three-term state representative. She is the first Muslim American woman to be elected to the state legislature and seeks to bring an effective change through running for Congress.\

According to his platform, his goals include redeveloping neighborhoods and communities, including making water affordable for residents stopping tax foreclosures of many owner-occupied homes and increasing public safety; economic prosperity; education, including early childhood education, afterschool programs, college graduation and teacher pay and health care.

U.S. Rep. Brenda Lawrence (D-Southfield) is a member of the Transportation and Infrastructure Committee as well as the House Oversight and Government Reform Committee. First elected to Congress in 2014, the former four-term mayor of Southfield recently helped introduce legislation that calls for employees of Congress to be trained to prevent sexual harassment.