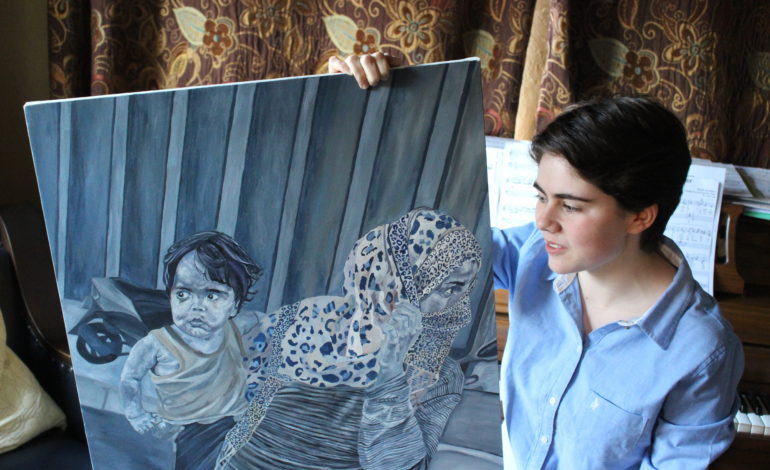 DEARBORN — A young Syrian refugee girl had no idea when she was selling gum on the streets of Beirut, but the cryptic expression of fear and confidence on her face would become part of a visual story of struggle that aims to connect everyone with a story to tell. The portrait of a Syrian refugee girl who was selling gum on the streets of Beirut, painted on newspaper clippings about the struggles of refugees

Mayssa Fakih, a 17-year-old art student at Mercy High School, an all-girls private, Catholic school in Farmington Hills, took the girl’s photo from a taxi during an annual summer family trip to Lebanon. When the girl, with her family looking on in the background, approached the cab, Fakih knew she would be the face of her art project, an eight-piece portfolio she submitted to the Scholastic Art and Writing Awards, in which she won a Regional Gold Key.

Painting brings certain emotions to life. You can incorporate different colors and use different techniques to bring out a creative side and give a bigger mouth.

A painting of that refugee girl over a canvas of newspaper clippings about the struggles of Syrian refugees in Michigan and around the world, now hangs at an exhibit with paintings by other students in her age group at the College for Creative Studies.

The portfolio project began as a class assignment, which had to have a theme, including flowers, animals, time or politics. But Fakih said the concept that interested her the most was sharing people’s struggles.

She said she originally was trying to capture the “magic” of the people in Lebanon – that even in trying times, they demonstrate determination, humility and compassion toward one another. But scouring Lebanon for interesting photos for her art project revealed more than she’d expected, as it underscored the plight of refugee from neighboring countries in the Middle East.

The project also bridges the gap between the struggles of refugees from Palestine and Syria and those in Western countries where Arabs are increasingly settling.

When Fakih was a student for a semester at Dearborn High School, she said she witnessed several Syrian refugee students suffering racial taunts, mainly from their Arab American classmates, for being outsiders.

A reaction to her message is harder to achieve without the unique brush strokes and techniques she incorporates into her paint.

That transpired in a painting she made after being approached by two young boys who were covered in dirt. They worked at a tire shop and begged for money on the streets to support their family. In the piece based on the photo she took, the boys’ disheveled appearance was apparent, but the entire painting revealed a deeper story.

The symbolism is in the details like a painting’s color profile; darker shades for a dirty face and colors in their clothing that pop, illustrate a contrast between dark circumstances and a brighter future to come.

Fakih said she was originally mostly interested in oil painting, but her teacher suggested she start using a medium that could easily switch from looking like water-color paint to an oil-based paint, depending on the amount of water mixed with it. That’s how she paints most of her pieces now.

She also said she’s interested in photography, but she likes using brush strokes and finds more of an emotional connection to paintings.

“I always thought that paintings speak louder than photos,” she said. “Painting brings certain emotions to life. It might not be as detailed, but you can incorporate different colors and use different techniques to bring out a creative side and give a bigger mouth.” A painting of Juliana, the girl with Down Syndrome

In one painting, for example, Fakih tweaked the composition of a photo and left out some design features so that the focus is on the subjects’ facial expressions.

“People do say that they look more emotional in my painting than they do in an actual photo,” she said.

Fakih said she wanted her approach to be organic, so she stayed away from taking posed photos. She would capture a shot before approaching her subjects to speak to them and find out more about their personal stories.

However, her portfolio didn’t only feature the struggles of refugees. With a broader stoke, she also depicted the humanity of people overcoming hardships.

One piece Fakih submitted, for example, portrays Juliana, a girl with Down Syndrome whom her sister mentors at special needs school program. She said her sister talked a lot about Juliana and that she felt an instant connection with her when she met her.

She also showed the pressure many African Americans face with conforming to White hair beauty standards with a painting of a Black friend stretching out her hair with a straightener to the side. A painting of an African American girl straightening her hair

Fakih called her style abstract-realism, a hybrid approach that make her painting look realistic enough to feel a human connection to a subject, but abstract enough to leave room for creativity.

Art began as something she did for fun, she said.

She said that when she was as young as 3-years-old, her parents would notice that she’d make drawings of anything she could, using objects from around the house. She had a box filled with drawings she’d make.

But now, she said she sees art as a platform to spread a message and hopes to one day make it a career.

Fakih said he chose to highlight struggle in her project because it’s topic with a message that could easily be shared though paintings.

“You can find truth in struggle,” she said. “If you put a picture in front of [people] and you’re not making statements or claiming things, it’s harder for them to become defensive.”

Fakih said she hopes to find the subjects she featured in her works during her next visit to Lebanon and give them copies of the paintings she made of them.