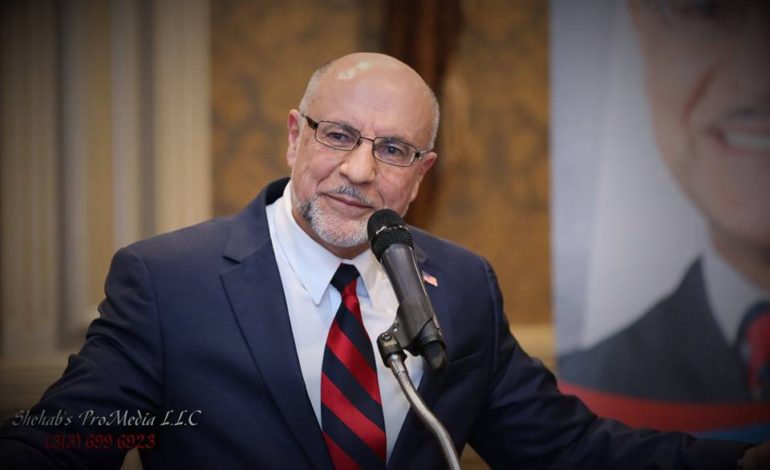 DEARBORN – On March 15, a large crowd of community members and local elected officials came out to Byblos Banquet Hall in support of 19th District Court Chief Judge Salem Salamey’s bid to be re-elected to the bench.

Salamey, a father of four, was elected Dearborn’s first Arab American judge in 2012. He is currently running unopposed, but the last day a candidate can file a petition to be on the ballot is about 35 days away.

Salamey previously served as magistrate for the court for 14 years. He began his professional law career working with the late Michael Berry’s law firm before starting his own law firm in Dearborn, which specialized in criminal and business law.

We are equally blessed to have a judicial system that may not be perfect at times, but it is the best system authored and practiced by mankind.

Salamey’s supporters and speakers at the fundraising dinner described him as an American success story and a balanced individual – not only when handing out sentences, but also in his personal life.

They boasted about his achievements and said that since his election, the court has experienced improvements in the processes, procedures, budget and management.

Mayor Jack O’Reilly reiterated his support of Salamey’s re-election as the evening’s main speaker. He was described by MC Hassan Bazzi as a long-time supporter of Salamey who has often credited him for balancing the budget and improving morale at the court.

O’Reilly laid out some reasons why “it would be foolish” to consider anyone for the position except a “leader” who’s “getting it done.”

He said that in many cities, the government’s administration and courts are often distant and don’t relate well to each other. In Dearborn, however, both engage in working toward the best interest of the community.

“We have done more things that make sure we’re on the same page,” O’Reilly said. “That coordinates everything from the arrest all the way through the prosecution and everything else.”

The mayor added that his office, the City Council and Salamey’s team meet regularly to discuss how to better streamline the judicial process in favor of the residents. City Council President Susan Dabaja, who was Salamey’s former law partner, said the evening was the first time she’d endorsed any candidate while in her position. She shared three reasons for her support.

She said that as a fellow attorney, she watched Salamey represent his clients every day with “compassion and trustworthiness.” She credited him for her even temperament and said he taught her to make decisions on a case-by-case basis.

Dabaja added that Salamey has demonstrated the same qualities on the bench that he did as an attorney.

She described him as always even-tempered, fair and prepared. She also said he has an extensive knowledge of the law and strives to educate both parties on the matter before them. He also doesn’t blindly administer the law.

“While those qualities are important to have as a judge, it’s equally as important to have humility, compassion and a genuine interest in protecting the public interest,” Dabaja said. “This isn’t just a job for Judge Salamey; it’s a lifestyle he personifies and he take with him to the bench.”

As he took to the stage, Salamey said he was honored and humbled by the show of support and offered a glimpse of the importance of having a qualified judge serve in his position.

“We are blessed to live in a country like ours – a country of laws, not of men,” he said. “We are equally blessed to have a judicial system that may not be perfect at times, but it is the best system authored and practiced by mankind.

“Whether it’s a crime or civil disputes, courts are the institutions where these matters are resolved and fairly and justly adjudicated,” he added. “When we say or hear the word ‘justice’, we have imprinted in our minds by power of imagery, a vision of a scale, where balance prevails.

“This scale is neither an imaginary one, neither a theoretical one. It is practical, and it is best balanced by those with adequate experience, understanding and compassion, by fair minded and competent judges, judges who heel and decide each case on its own merits, without bias, prejudice or favor. I’d like to think that I am one of these judges.”

He thanked the audience and Dearborn’s residents, and urged them to remain engaged in democracy and with officials through decision making processes.

Salamey asked the audience for prayers and shed a tear for two individuals he considered mentors, “The now-deceased Michael Berry, the first Arab and Muslim American to practice law in Michigan”, and Ali Naji, whom he called his “first client and a client until the very end.”

Salamey moved to Dearborn at the age of 14. He began his working life with the Dearborn Police Department as police-community liaison. He then took a job with the Dearborn Board of Education while attending college. He received his bachelor of arts degree from Wayne State University and his law degree from the Thomas M. Cooley Law School in Lansing in 1985.