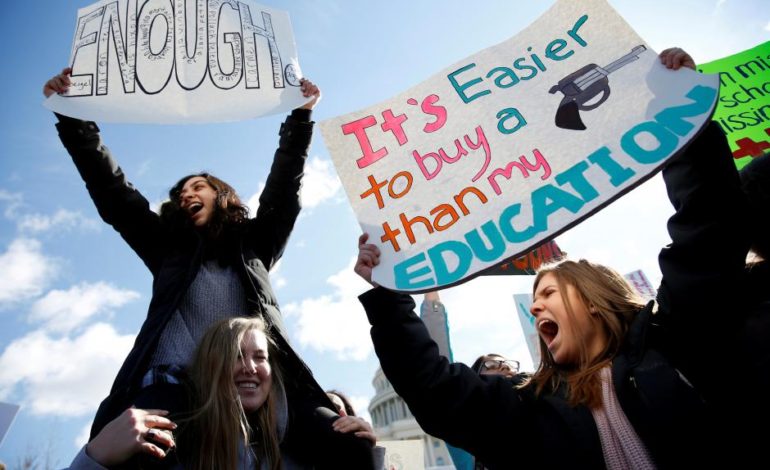 Students from Washington, DC-area schools protest for stricter gun control during a walkout by students at the U.S. Capitol in Washington - Reuters

WASHINGTON, D.C. — The House of Representatives approved spending more money on metal detectors, locks and other school security measures on Wednesday, but took no steps to tighten gun control laws a month after a Florida high school shooting that killed 17 people.

While students marched nationwide for change on one of America’s most vexing social issues, lawmakers voted 407-10 for legislation to spend $50 million to $75 million per year from 2019 through 2028 on school security and safety training.

No parallel measure was pending in the Senate, where a somewhat more ambitious bill was being debated, but prospects for meaningful gun control reforms in Congress remained remote in the face of stiff resistance from gun industry lobbyists.

It was not yet clear when the Senate would take up the House bill, which would not become law without Senate approval.

President Trump applauded the House bill, the White House said, though it falls far short of broader gun control legislation he talked about shortly after the shooting at Marjory Stoneman Douglas High School in Parkland, Florida.

The measure would not allow any of the funding to be used for arming teachers or other school personnel. The White House said the bill would be improved by lifting that restriction.

Since the Parkland massacre, student protesters have successfully lobbied for tighter gun controls in Florida. Hundreds of them gathered outside the Capitol to urge Congress to take action on placing new limits on firearms and gun sales.

In the Senate is a bill to strengthen existing background checks of gun purchasers. It enjoys broad bipartisan support but has not been scheduled for debate.

Congressional aides said discussions were underway about folding the school safety and background check bills into a government funding bill that lawmakers want to pass by March 23.

Since the Florida shooting, the Republican-led Congress and the Trump administration have considered measures to curb gun violence while trying to avoid crossing the powerful National Rifle Association lobby group, or threatening the right to bear arms enshrined in the Constitution’s Second Amendment.