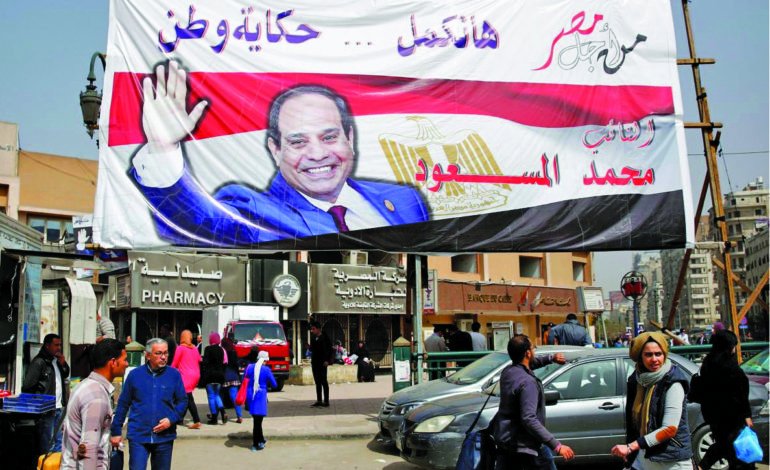 A giant poster of Egyptian President Abdel Fattah al-Sisi for the upcoming presidential election, in Cairo, March 1 - Photo by Reuters

CAIRO — Egyptian President Abdel Fattah al-Sisi said on Thursday his government had fulfilled its promises during his first term and called on Egyptians to vote in large numbers in an election where he is seeking a second term in office.

The former army chief is widely expected to win by a huge margin in the March 26-28 vote, since his only challenger leads a party that supports the Egyptian president.

Neither candidate has done much campaigning, appealing instead for a high turnout to give the victor a strong mandate. Sisi won nearly 97 percent of the vote in 2014, but less than half of eligible Egyptians voted even though the election was extended to three days.

“If (all Egyptians) vote and a third say ‘No’, that would be a lot better than if half that number turn out and all of them say ‘Yes’,” Sisi said during a visit to the Interior Ministry.

Sisi also told a conference of military officers and relatives of soldiers killed in action that his first four years in office had brought stability and security after the tumult which followed the popular uprising of 2011.

“We achieved our promise and you have to achieve your promise. As we didn’t abandon you, you should not abandon (us),” Sisi said.

“I think – and all Egyptians think – how hard and hopeless and really dark those days were,” Sisi said, referring to the two years after the 2011 overthrow of veteran autocrat Hosni Mubarak. “The state was lost, threatened by a great war.”

Sisi promised to work for stability and security when he assumed power, but has struggled to defeat an ISIS insurgency in the Sinai Peninsula and contain other militant attacks across Egypt.

His supporters argue that the security situation now, although not completely secure, is better and more predictable than the unrest that rocked Egypt for years after the Arab Spring uprisings of 2011.

Last month the army began a major assault in Sinai and says it has killed scores of suspected militants and detained hundreds more in the region, the main stronghold of ISIS after its defeat in Libya, Iraq and Syria.

In the past four months, the militants have carried out two spectacular assaults in Sinai – on an air base in December and at a mosque a month earlier, killing more than 300 people.