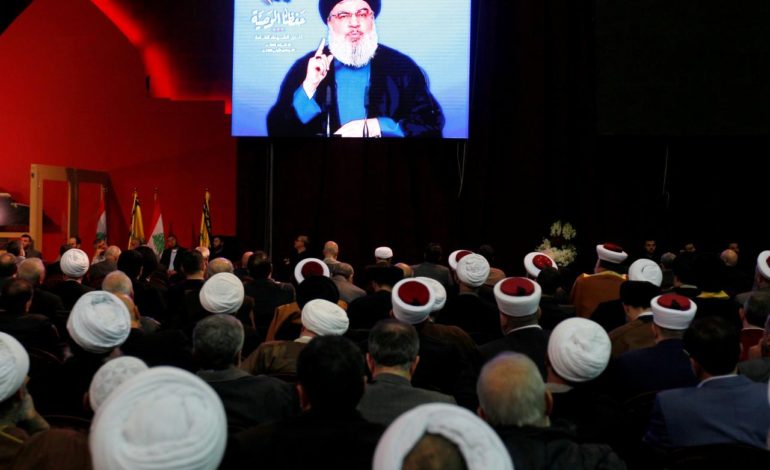 Lebanon's Hezbollah leader Sayyed Hassan Nasrallah is seen on a video screen as he addresses his supporters in Beirut, Lebanon, February 16 - Reuters

BEIRUT — The leader of Lebanon’s powerful Hezbollah group, Sayyed Hassan Nasrallah, said on Wednesday that the deeply indebted country faced disaster if it continued on the same financial path.

Iran-backed Hezbollah is part of Lebanon’s coalition government and wields extensive influence in Lebanese politics. Nasrallah was speaking on television about the group’s platform for parliamentary elections in May.

“The danger reaches to the level of an existential threat to the state and to the country, and to the security and stability of society if the financial situation and spending continue like this,” he said.

He urged measures to rationalize spending, reduce public debt and combat corruption and wastefulness, but without giving specifics.

Lebanon has a debt-to-GDP ratio of about 150 percent, one of the highest in the world, and has endured years of weak economic growth since the start of war in neighboring Syria in 2011.

The cabinet has agreed on a budget for 2018 and aims to push it through the parliament before a meeting of international donors in Paris early next month.

The International Monetary Fund, which expects Lebanon’s economy to grow about 1-1.5 percent this year, said last month that its debt trajectory was unsustainable and fiscal and structural reforms are needed urgently.