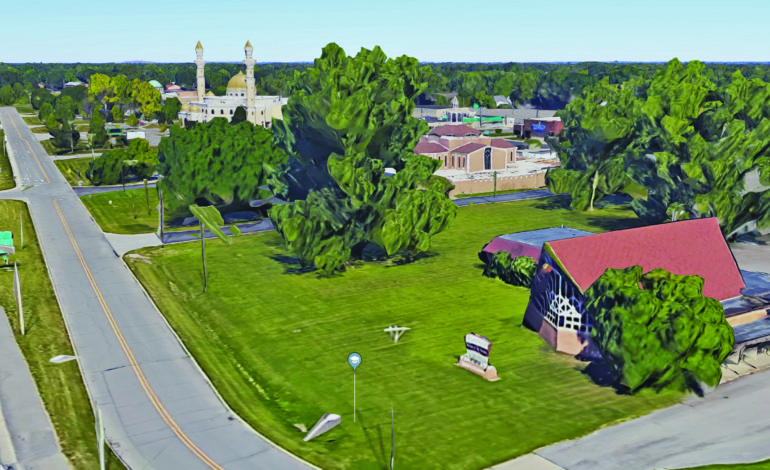 DEARBORN – Tensions are high among community members over the proposed opening of a Holiday Inn Express hotel about 500 yards from Dearborn’s largest mosque.

The hospitality chain seeks to construct a business-geared hotel in place of a church that has been vacant for three years, on a triangular block that’s home to the Islamic Center of America (ICA), two charter schools, a handful of churches, a community center and a retirement complex.

However, many residents, regulars at the religious and community institutions and concerned parents vehemently oppose the project, charging that the hotel is likely to invite crime, drug activity, prostitution and even human trafficking.

On March 22, disapproving locals and supporters of the development packed the City Council chambers at the Dearborn Administrative Center. They shared with the five Council members present strong opinions during a study session meeting on whether the Council should approve a change in the zoning codes from a residential area to one that supports business and commercial properties like the hotel.

According to developers, the planned four-star hotel would have 107 rooms and sit on a three-acre plot of land where the now-closed Mother of The Savior Church currently sits. The hotel would not include a restaurant or bar, but would only serve breakfast. It would also employ about 50 individuals and the city would generate about $250,000 annually in property tax revenue.

The triangular block had been designated as a residential area since 1931, but the City Planning Commission unanimously voted (7-0) in November to recommend that the area be rezoned to accommodate businesses.

Joseph Ejbeh, the developers’ and Holiday Inn’s attorney, told Council members that the hotel chain is bound by its mission to invest in the communities in which it builds. One way of doing that is to expand on the benefits created by the Holiday Inn Express & Suites at Telegraph Road and Michigan Ave. in southwest Dearborn, which was deemed by the company as the busiest hotel of its kind in the world.

The project’s partners are Nasser Hamadeh, Malek Abdulnour, Jimmy Asmar and Milad Knouna. Abdulnour and Asmar own 82 hotels across the U.S.

Ejbeh said that before the hotel was erected there, the intersection of Telegraph and Michigan Ave. was an “eyesore” that consisted of “seedy people that would hang out and do bad things.”

He said the multi-million-dollar investment turned a troubled area to a thriving one, with two “beautiful” buildings as its hallmark.

“The people that are staying there are people of this community,” Ejbeh said. “They’re business people, corporate people coming in from out of town.” Holiday Inn’s attorney speaks to the Dearborn City Council during a sudy session meeting about rezonining an area to allow for the hotel to be built, March 22 – A video grab of the meeting by The AANews

And now, the franchise wants to do the same on the other side of town and invest $12 million to build the hotel.

Ejbeh said the allegations that the proposed hotel would breed criminal activity in the area is, “so insulting to the integrity and grain of everything this company stands for, not to mention corporations like Hilton and Marriot.”

He added that no alcohol would be sold or served at the hotel.

Councilmembers Susan Dabaja and Mike Sareini were quick to bring the discussion back into focus about zoning and said the Council hadn’t discussed any possible moral impacts the hotel might have.

Ejbeh added that Holiday Inn conducted substantial market studies on the sought-out location that suggested the community supports another hotel there.

Ejbeh added that the Planning Commission had previously unanimously approved the zoning of the area to allow for a hospitality establishment based on studies laid out in the city’s master plan.

He said the developers asked for the zoning change based on the predicate that the ICA’s board was passive and did not provide a specific position about the project.

He also pointed out that the company had performed $700,000 worth of due diligence, including conducting environmental studies, working with the Building and Engineering Department and getting the flagship location approved by the franchise company.

Movses Shrikian, vice chairman of the St. Sarkis Armenian Apostolic Church’s board of trustees, asked the Council to consider some negative impacts the zoning change would have.

He listed factors like traffic, the safety of pedestrians and the size of the building.

“Once that zoning change is granted, it changes the entire character of that community,” Shrikian said, adding that many senior citizens who live in a building adjacent to St. Sarkis walk along pathways near the proposed site.

Milad Knouna, one of the investors in the property, said he personally approached all the current tenants and requested a meeting.

Linda Charara, a staff representative of the Muslim American Youth Academy (MAYA) and ICA Board of Education member, said parents are concerned the school will be in danger and that some are considering moving their children to other schools.

She added the current zoning limits traffic for certain hours of the day, while hotels traffic is ongoing. School dismissal time around 4 p.m. also coincides with most hotels’ check-in times, adding to the threat of noxious traffic.

“Our gut reaction as parents and school staff is ‘stranger danger,’” Charara said. “Predators come from all walks of life and to be able to have that easy access to kids is scary for us.”

She added that the hotel cannot guarantee its clients will all be staying there for business and that children, who often participate in activities outside the school, are under threat from unregistered sex offenders and human traffickers.

Richard Sundquist, an attorney with Clark Hill in Detroit, who is representing both the ICA and MAYA school, said they’re, “vehemently opposed to this rezoning.”

He said the triangular area was meant for cultural diversity and a crossroads of faith and culture that should be preserved.

Sundquist added that the ICA invested about $25 million in the city and plan to spend additional millions, and that MAYA is planning on adding about $5 million to expand its facility. Mosques and churches are tax-exempt, so they don’t bring any tax revenue to the city.

“Whether you call it addition zoning or spot zoning, you are creating an inconsistent use in the larger area,” he said.

At the conclusion of the agenda item on amending the zoning ordinance, Councilman David Bazzy motioned to deny the zoning change, which was seconded by Councilwoman Erin Byrnes.

A formal vote by the City Council on whether to deny the Planning Commission’s suggestion to rezone the area will take place on Tuesday, March 27.

Nasser Hamadeh told The AANews that the Council members’ votes were “unfair” and rigged.

“This decision was made not based on rezoning the property,” he said. “It was made based on emotion and drama concocted by people who were brought in by the ICA or MAYA school to act up.”

He said that the ICA Board had denied an offer to meet with the developers and rejected their proposal to pay for private security to guard the ICA and the schools during school hours.

Hamadeh also pointed to a possible conflict of interest faced by Dabaja and Sareini, whose spouses are board members at MAYA and the ICA, respectively.

At the start of the council meeting, Debra Walling, the city’s attorney, said Dabaja and Sareini are not required to recuse themselves from the voting process because of those relationships.

Hamadeh added that MAYA was opposed to the project because of internal plans to build a high school on the site. A note from MAYA Chairman Chadi Farhat that circulated among community members reads, “Personally I think IC of A should buy the place and expand MAYA into a high school.”

Hamadeh said the development team is now in process of consulting with their legal counsel to weigh their options.