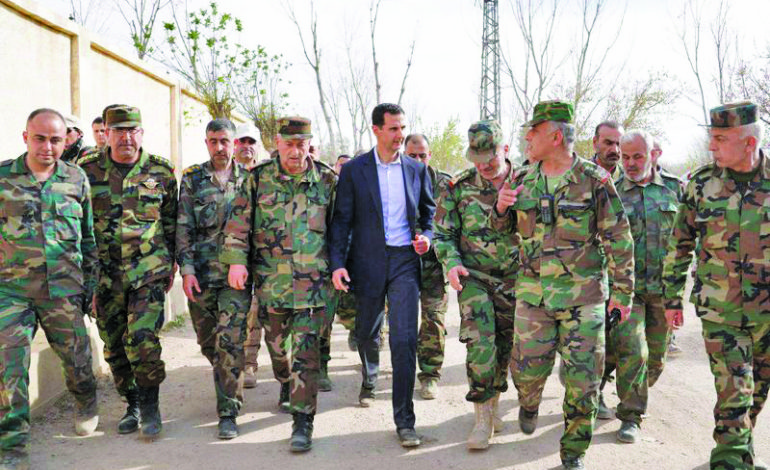 BEIRUT/DAMASCUS — Syrian rebels withdrew in busloads from a town in eastern Ghouta on Thursday and handed it over to the Syrian army, the first such surrender since one of the fiercest campaigns of the seven-year war began more than a month ago.

The Ahrar al-Sham group’s decision to accept the army’s terms and abandon the town of Harasta puts the government on course for its biggest victory over rebels since the battle of Aleppo in 2016.

After dark fell on Thursday around 30 buses carrying rebel fighters and their families left the town. Syrian state media said the buses carried 1,580 people including 413 rebel fighters given safe passage to northwestern Syria.

An army officer interviewed on state television said rebels who had not yet negotiated similar deals to evacuate from other towns in eastern Ghouta must quit or die.

“Death is coming for you if you do not surrender,” he said.

The army’s assault on eastern Ghouta, the last major rebel bastion near the capital, has been one of the most intense in Syria’s seven-year-old war.

Between 18,000 and 20,000 people were expected to stay in Harasta under government rule, a military source said.

The eastern Ghouta campaign has seen Syria and its Russian allies use the tactics that proved successful in other parts of the country since Moscow joined the war in 2015: lay siege to an area, bombard it, launch a ground assault and finally offer safe passage out to rebels who agree to leave with their families. Civilians evacuated from the Eastern Ghouta enclave pass with belongings

Elsewhere in the eastern Ghouta enclave, state television reported that more than 6,000 people had fled the larger rebel-held town of Douma since Wednesday, crossing over into government-held territory.

The government’s control of Harasta leaves eastern Ghouta’s rebels in control only of Douma and another pocket that includes the towns of Jobar, Ein Terma, Arbin and Zamalka.

Assad broadcast a video of himself
driving to Ghouta from Damascus

On Sunday, Assad drove himself to a newly captured battlefront in eastern Ghouta, a demonstration of his seemingly unassailable position in the war that has been going his way since Russia sent its air force to help him in 2015.

The deal to surrender Harasta began on Thursday with a prisoner swap. In an interview with state television, a Syrian soldier freed by rebels wept and thanked God and the army for his release.

The Russian Defense Ministry website showed what it said was live footage from the al-Wafideen crossing point from Douma into government areas. Over a period of several minutes, it showed dozens of people in small groups coming around a corner and trekking along the dirt road past armed soldiers.

Some bore bundles of their possessions, others carried small children or pushed prams.

Douma is the most populous area in eastern Ghouta, and for more than a week it has been entirely surrounded by the government. The Jaish al-Islam rebel group that holds the town has said it is determined to fight on.

Over the past week, tens of thousands of people have fled across the frontlines from eastern Ghouta into government controlled territory.

The Harasta rebels will be taken to Idlib province in the northwest, which has become the main sanctuary for insurgents who agree to quit territory under deals with the government.

The northwestern province is the biggest remaining area under rebel control in Syria and its population has been doubled by refugees fleeing other areas.

But it too is a military target for the Assad government, who vows he will reassert control over the entire country.