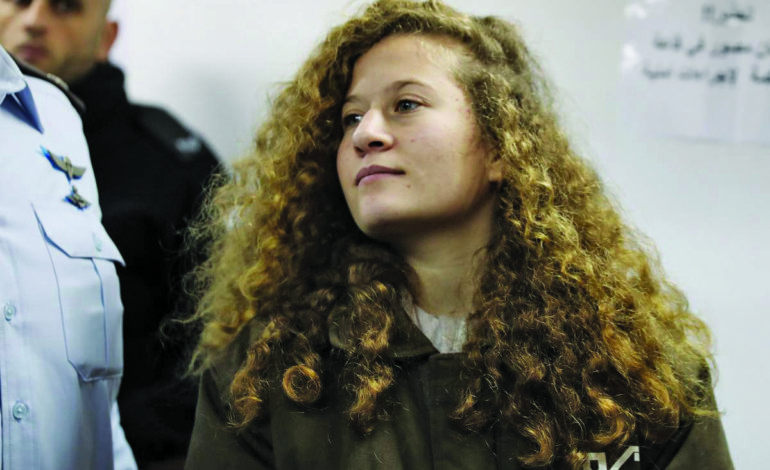 WEST BANK — A teenage Palestinian girl who was filmed kicking and slapping an Israeli soldier in the occupied West Bank accepted a plea deal on Wednesday under which she will be sentenced to eight months in prison, her lawyer said.

Ahed Tamimi, 17, became a hero to Palestinians after the Dec. 15 incident outside her home in the village of Nabi Saleh was streamed live on Facebook by her mother and went viral.

The soldiers had deployed during a weekly Palestinian protest in the village against Israeli policy on settlements in the West Bank, one of the most heated issues in the Israeli-Palestinian conflict.

Tamimi was 16 at the time of the offense. Her trial began last month and she faced 12 charges, including aggravated assault.

“No justice under occupation!” Tamimi, handcuffed and shackled, shouted out to reporters at court in the Ofer military prison, near the West Bank city of Ramallah.

Tamimi’s attorney Gaby Lasky said that under the deal approved by the court, Tamimi will plead guilty to a reduced charge sheet that includes assault and would be sentenced to eight months in jail and pay a fine of 5,000 shekels (about $1,430). The Israeli military confirmed the details of the deal.

Lasky said the jail term included the time Tamimi has spent in detention since her arrest in December.

Tamimi’s case drew global attention. Amnesty International called her the “Rosa Parks of Palestine” and the small courtroom was often packed with journalists, diplomats and international observers during hearings.

A group of American cultural figures, including actors Danny Glover and Rosario Dawson and novelist Alice Walker, signed a petition calling for her release and comparing her case to those of “the children of immigrants and communities of color who face police brutality in the United States.”

Tamimi’s family are veterans of protests against an Israeli settlement near their home. An Israeli watchtower stands at the entrance to the village and there are often soldiers in the area. Her mother, Nariman, and a cousin were also arrested. Both have accepted plea bargains, a family lawyer said.

“When the European people see my daughter, blonde and blue-eyed, they are shaken, because they saw their children in front of them. It broke the stereotyped image of the Palestinian in the international community,” Tamimi’s father, Bassem Tamimi, told Reuters.

Amnesty said in a released statement after Tamimi’s conviction that her sentence was at odds with international law, saying imprisonment of a minor must be used only as a last resort for the shortest appropriate period of time.

“The Israeli authorities must stop responding to relatively small acts of defiance with such disproportionately harsh punishments. By ruthlessly targeting Palestinians, including children, who dare challenge Israel’s oppressive occupation,” Amnesty said. “The authorities are neglecting their responsibilities under international law as an occupying force.”