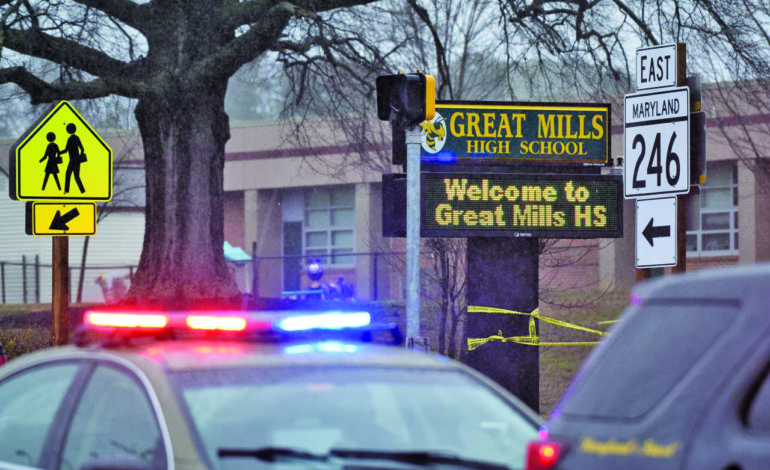 GREAT MILLS, MD — A 17-year-old boy opened fire at a Maryland high school on Tuesday in an attack that left two fellow students wounded, then died after a gunfight with a police officer posted there, amid a renewed national debate over gun violence in schools.

The shooting in St. Mary’s County, about 70 miles south of Washington, came five weeks after a high school massacre in Florida and just days before a planned student-led march in the U.S. capital for tougher gun laws.

The latest bloodshed erupted shortly before 8 a.m. at Great Mills High School and lasted less than a minute, county Sheriff Timothy Cameron said, but the precise sequence of events was still being sorted out hours later.

A 16-year-old girl was in intensive care with life-threatening wounds, Cameron told a news conference. A 14-year-old boy also struck by gunfire was listed in good condition at a hospital.

The gunman was identified as Austin Rollins, and Cameron said there was “an indication” the teenager had a prior relationship with the female student, although that was still under investigation.

The sheriff initially told reporters the gunman shot both victims with a handgun, but then said in response to questions that investigators were still uncertain who fired the shot that hit the 14-year-old.

Cameron also said it was not clear whether the gunman died after being shot by sheriff’s Deputy 1st Class Blaine Gaskill, who was assigned as the Great Mills school resource officer, or from self-inflicted gunfire.

The attack ended after Gaskill ran inside and confronted the gunman, with each firing a single shot almost simultaneously.

The officer was not harmed, Cameron said. The gunman was confirmed dead nearly three hours later at a hospital.