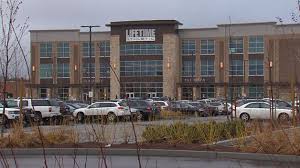 DETROIT — A local  man has who has pleaded guilty to charges of stealing from customer lockers at Lifetime Fitness in Canton and has avoided jail time.

Ali Sami Hammoud, 54, appeared before Wayne County Circuit Judge Dana Hathaway on Friday and was sentenced to probation for 18 months.

Defense attorney William Amadeo told Hometownlife that they were pleased with the outcome and that probation was their goal.

Hammoud’s sentencing came after he earlier pleaded guilty to one count each of larceny in a building and stealing a credit card. Authorities dismissed two identical charges.

Hammoud, a father of 11 children, could have faced five years in prison if he had gone to trial and been convicted, rather than accepting a plea deal.

Hammoud was arrested Jan. 27 by Canton police after customers reported stolen wallets, cash and credit cards at the fitness center on Haggerty Road, south of Ford.

Detective Lt. Mike Steckel said police went to Lifetime Fitness after a man whose credit card was stolen reported that it had just been used at the Walmart store across the street.

Police say customers had reported a rash of thefts in December and January at the fitness center, but Hammoud was only charged with four felonies, two of which were dismissed.