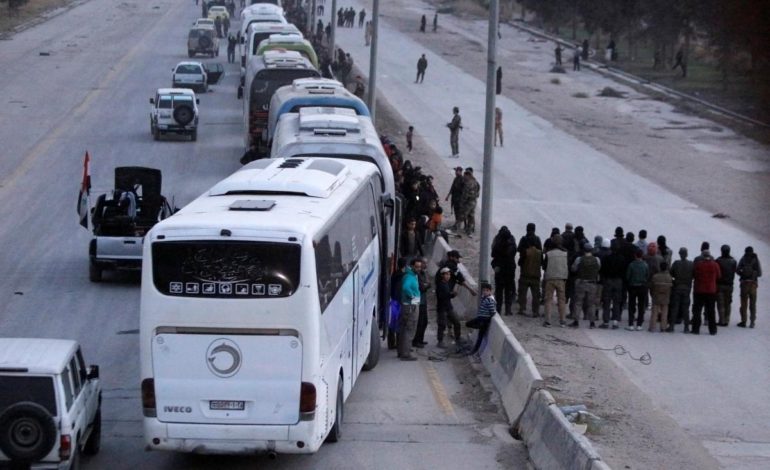 Rebel fighters gather and pray before they leave, at the city limits of Harasta, in the eastern Damascus suburb of Ghouta, Syria March 22, 2018. REUTERS

BEIRUT – Syrian rebel factions are blaming each other for opening the way to their defeat near Damascus, underlining splits that plagued the armed uprising against President Bashar al-Assad since its earliest days.

The rivalry between the factions of eastern Ghouta – Failaq al-Rahman and Jaish al-Islam – had led to the effective partition of the enclave since 2016 and fueled bouts of deadly violence that played to the government’s advantage.

Their rivalry has at some points mirrored tensions between their regional sponsors: Saudi Arabia, which has backed Jaish al-Islam, and Qatar, which supported Failaq al-Rahman.

With the help of Russian air strikes, the army has waged one of the most ferocious offensives of the war to recapture eastern Ghouta.

Still, in media comments late on Sunday, the groups laid blame on each other for speeding up the government’s advances.

The Jaish al-Islam military spokesman, in an interview with al-Hadath TV, said Failaq al-Rahman had rejected a proposal to mount a shared defense of Ghouta and accused it of cutting water supplies needed to fill defensive trenches.

“These trenches dried up which sped up the regime’s advances,” said Hamza Birqdar, the spokesman.

The Failaq al-Rahman spokesman told the same TV station that Jaish al-Islam had staged a weak defense of the enclave, which advancing government forces split into three separate pockets.

“Failaq al-Rahman was stabbed in the back … via the frontlines that Jaish al-Islam was supposed to be at,” said Wael Olwan, Failaq al-Rahman’s Istanbul-based spokesman.

A Syrian official said the “conflict between the terrorist groups” in eastern Ghouta was one of the factors that had helped the military “achieve what it has achieved in a short space of time”.

It echoes a pattern at other key moments in the seven-year-long war: rebels blamed each other as government forces and their allies thrust into opposition parts of eastern Aleppo, won back by the Syrian army in 2016.

Thousands of Failaq al-Rahman fighters, accompanied by their families, are leaving their zone of eastern Ghouta in a negotiated withdrawal to insurgent territory in northern Syria.

Jaish al-Islam says it is holding out in its part of the enclave in the eastern Ghouta town of Douma. Assad’s Russian allies said on Monday that Jaish al-Islam fighters were also ready to lay down their arms and leave, which the group denied.

Rebels who have left eastern Ghouta so far have gone to Idlib, an insurgent-held region at the Turkish border. Idlib has also been blighted by fighting between the dominant faction – fighters formerly affiliated to al Qaeda – and other rebels.

Russian and Iranian military backing for Assad has also far outstripped support that had been offered to rebel groups from foreign states including Turkey, Qatar, Saudi Arabia and the United States.

In addition to their foothold in the northwest, anti-Assad rebels still hold a chunk of territory at the frontier with Jordan and Israel, and small enclaves near Damascus, Homs and Hama.