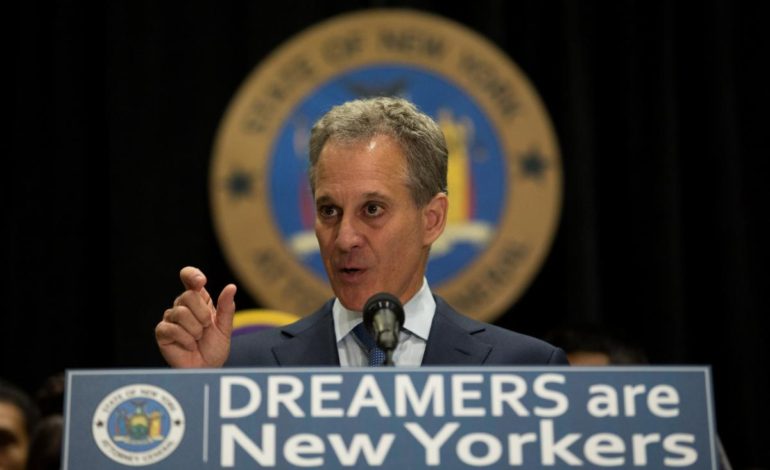 New York state’s attorney general said on Tuesday he will lead a multistate lawsuit to try to stop the federal government from asking people whether they are citizens in the 2020 Census, arguing the move will discourage immigrants from participating.

The U.S. Commerce Department, which runs the Census Bureau, announced on Monday that Commerce Secretary Wilbur Ross had decided to include the citizenship question after a Justice Department request based on a desire for better enforcement of the Voting Rights Act. The act protects minorities’ voting rights.

Ross had decided that “obtaining complete and accurate information to meet this legitimate government purpose outweighed the limited potential adverse impacts,” the department said in a statement.

New York Attorney General Eric Schneiderman said that demanding to know respondents’ citizenship status “will create an environment of fear and distrust in immigrant communities that would make impossible both an accurate Census and the fair distribution of federal tax dollars.”

He said in a statement he would lead a multistate lawsuit to block the decision. The statement did not say which states would join the lawsuit and when it would be filed. His office did not immediately respond to a request for comment.

The State of California, which has a large immigrant population, filed a lawsuit early Tuesday in federal court against the Commerce Department and the Census Bureau.

California Attorney General Xavier Becerra asked the U.S. District Court in the Northern District of California to issue a preliminary injunction and rule that the move violates the Constitution by interfering with the obligation to conduct a full count of the U.S. population.

The census, which is mandated under the U.S. Constitution and takes place every 10 years, counts every resident in the United States. It is used to determine the allocation to states of seats in the U.S. House of Representatives and to distribute billions of dollars in federal funds to local communities.

Ross said in a memo that the Voting Rights Act requires a tally of citizens of voting age to protect minorities against discrimination, and that getting this information as part of the census would make it more complete. Non-citizens do not have the right to vote in federal and state elections.

Opponents of a 2020 Census question about citizenship status say it could further discourage immigrants from participating in the count, especially when they are already fearful of how information could be used against them.

Maya Berry, executive director of the Arab American Institute said in a letter that the move makes it clear it that the Trump Administration is politicizing the census process and a decision that will deter many from responding to the census, because of concerns about the confidentiality and fear about how their response to the question will be used to target them.

“By abandoning the intensively researched combined-question format and MENA category, failing to fill leadership roles at the Census Bureau with qualified candidates, underfunding the Census Bureau, and now including an intrusive and untested question that will no doubt deter many from responding – this administration has jeopardized one of the foundational practices of our nation, choosing to play politics over allowing for a fair and accurate count,”Berry said. “The census is not simply an academic exercise. An undercount as a result of these decisions and the politicization of the process will have real, harmful consequences for communities across the country that stand to lose representation and funding.”

The announcement came as President Trump tries to keep his campaign promise to build a border wall between Mexico and the United States and to crack down on illegal immigration.

“This untimely, unnecessary, and untested citizenship question will disrupt planning at a critical point, undermine years of painstaking preparation, and increase costs significantly, putting a successful, accurate count at risk,” the Leadership Conference on Civil and Human Rights said in a statement.

Test surveys showed in late 2017 that some immigrants were afraid to provide information to U.S. Census workers because of fears about being deported.

Citizenship questions have appeared on the census in the past and are included on more frequent population surveys that are administered by the Census Bureau.