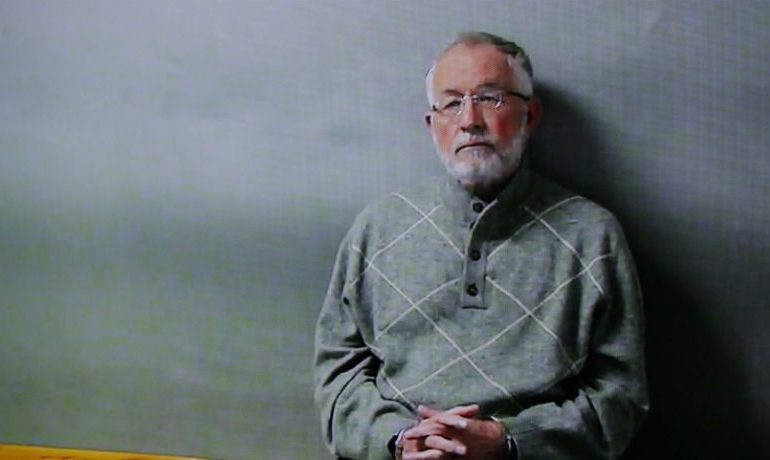 William Strampel during his arraignment

DETROIT ― A former Michigan State University dean, who supervised the doctor at the center of the USA Gymnastics sex abuse scandal, was himself charged on Tuesday with criminal sexual conduct involving medical school students.

The charges emerged during a probe into how Michigan State handled complaints about the gymnastics doctor, special prosecutor William Forsyth told reporters in Lansing. The focus widened after investigators received a tip.

The new charges, which Strampel’s attorney denied, make the university a bigger target for the “#MeToo” movement that has engulfed powerful men across society in harassment and abuse allegations.

“We did what we felt we needed to do and it led us to where we are today,” Forsyth said.

Strampel was dean from 2002 until the end of 2017. He supervised ex-USA Gymnastics physician Larry Nassar, who has been sentenced to prison for sexually abusing female gymnasts.

The four criminal counts against Nassar’s former boss include fourth-degree criminal sexual conduct. The accusations also include failing to properly oversee Nassar, whose scandal sparked probes into why the U.S. Olympic Committee, USA Gymnastics and the university failed for years to investigate complaints.

After a short hearing in state court in East Lansing, Strampel’s attorney John Dakmak told reporters, “My client denies that he ever engaged in any inappropriate touching of anyone. He denies that there was any quid pro quo for sexual favors.”Regarding the charges relating to Strampel’s supervision of Nassar, Dakmak said his client immediately involved other school officials in 2014 when the complaints surfaced and fired Nassar in 2016 when the sexual assault allegations were made.

Michigan State’s interim President John Engler said in a statement that one of his first actions upon his appointment in early February was moving to fire Strampel. Engler called the allegations against the former dean “disturbing.”

“Today’s charges confirm our belief that he has fallen short of what is expected and required from academic leadership,” Engler said.

Four female medical students told investigators Strampel made sexually suggestive comments during meetings, including what some perceived as academic privileges in exchange for sex. Two accused him of grabbing their buttocks without consent.

One student described meeting with Strampel in June 2017 to appeal a test score and feeling intimidated when he mentioned her age, saying: “26-year-old women can ‘put out’ for 20 minutes with an old man … and in return the women could get the benefit of a free vacation,” according to court documents.

Another witness said Strampel suggested she become a centerfold model and related to her how another student had become a stripper to pay for school, court documents said.

When Strampel agreed to let the student retake a test, he said she must agree to do anything for him, which she interpreted as a request for sex, court documents said.

Strampel is also accused of using his position as dean to receive pornographic images of women “through threats and manipulation,” court documents said. They said investigators seized his computer in February and found about 50 photos of nude women, sex toys and pornography, including selfies of female students, pornographic videos and a video of Nassar performing “treatment” on a young female patient.

Strampel, handcuffed hands clasped in his lap and his legs crossed, appeared at his arraignment via video feed. A split screen showed him expressing little emotion as he interacted with the judge.

Judge Richard Ball, citing a lack of criminal history, set a $25,000 personal recognizance bond, meaning Strampel need not post a cash bond. A preliminary hearing is set for May 3.

An attorney for more than 150 of Nassar’s victims said his clients were encouraged by the charges against Strampel.

The charges demonstrate that officials are “serious about investigating the systemic misconduct at MSU that led to the largest child sex abuse scandal in history and holding the responsible parties accountable,” John Manly said in a statement.

Michigan State has been criticized for its handling of Nassar, 54, who was a faculty member and physician at an on-campus clinic. Athletes had complained about Nassar since the 1990s, but the school did not open an investigation until 2014.

Nassar was fired in September 2016. He received sentences this year that will keep him in prison for the rest of his life.