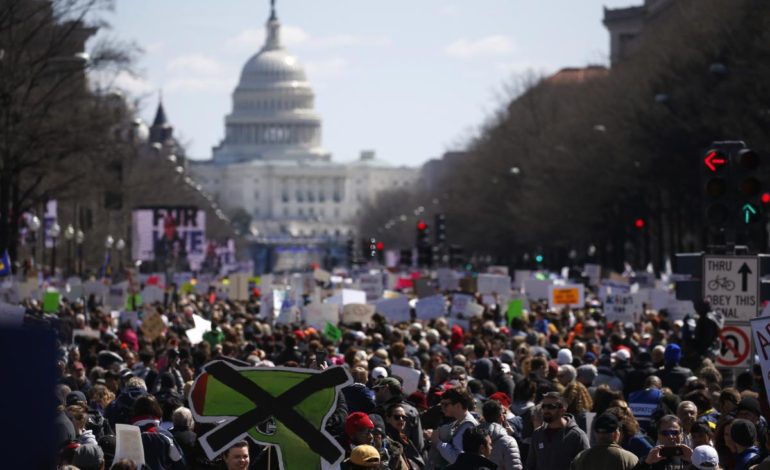 On March 24, hundreds of thousands of Americans took to the streets of Washington D.C., New York, Detroit and elsewhere to protest gun violence—or at least part of it.

The Parkland school shooting victims — around whose misfortune these protests arose— have demonstrated their readiness to use their privileged positionalities to forge connections and share their platform with students of color around this country whose suffering has yet to be recognized. This is new.

And it is so important. These students of color have endured for a long time, not silently, but without being heard because their voices have been treated as inaudible.

I admire the students of Parkland for their sense of obligation to uplift others, for their recognition that— as many great leaders before them have said— none of us are free until we are all free.

In the wake of this momentous march, I ask that they— and that all of us— continue to expand our sense of “we” to include the sufferings of those like and unlike us.

Gun violence, contrary to what has been said in recent months, is not a “uniquely American” problem. American gun violence has affected, undermined and utterly shattered the lives of millions of people of color around the world.

Beyond this, America’s negligence— its willingness to have guns so accessible to the general public— is only a symptom of a far larger issue: The pursuit of profit, paraded around as that of freedom, matters more to our government than does human life. And the less “American” (read “White”) the person, the truer this is.

America knows this and it remains complicit for the sake of profit.

This month marks 15 years since America began its leveling of Iraq. It had no business there—or rather, it was there only for business, for Iraqi oil and to generate profits for its arms industry.

In Iraq, America managed to kill well over 1 million civilians. It permanently devastated the psyches and futures of millions of children, many of whom watched their parents die.

What is worse, America was never held accountable for what should be war crimes. America has yet to admit that it itself— not some Sunni-Shi’a rift— is the principle reason behind the power vacuum ISIS (again, funded by Saudi Arabia) so easily filled.

Why did America go to Iraq? Why did it take so long to admit it must leave? Why were the horrors of Abu Ghraib so quickly put away, treated as an aberration rather than as a reflection of the American disregard for the sanctity of lives that do not resemble its own? The same questions apply in Afghanistan, where the Taliban is now stronger than ever. And why don’t we talk about Guantanamo? What happened in Vietnam? Why does America keep fighting ideological wars on behalf of people who do not want its help?

Why does the arms industry, the NRA and beyond control so much?

It is not because America does not value life, but because this country values profit margins more. This is far worse.

America has repeatedly dropped bombs on children and old people around the world as “collateral damage” in its fight for “democracy”—for money and control.

It is abhorrent that this same country would allow its children to die at school, but it should not be surprising.

America’s gun problem— which is actually much larger than a gun problem—is as “uniquely American” as is the right to pursue happiness.

We cannot continue to allow ourselves to undermine other people’s happiness and stability and still expect these for ourselves.

And not even because of something so vast as karma, but simply because the way we treat others is a reflection of how we treat ourselves. The moment America decided to value Black lives as lesser, it relinquished its capacity to value any life.

Life— all walks of it— matters more than money. It is about time America sees this.

On Saturday, hundreds of thousands of Americans gathered to demand that life matters. For this, together, we must march on.

-Mary Turfah was born and raised in Dearborn Heights and is a graduate of Yale
University.