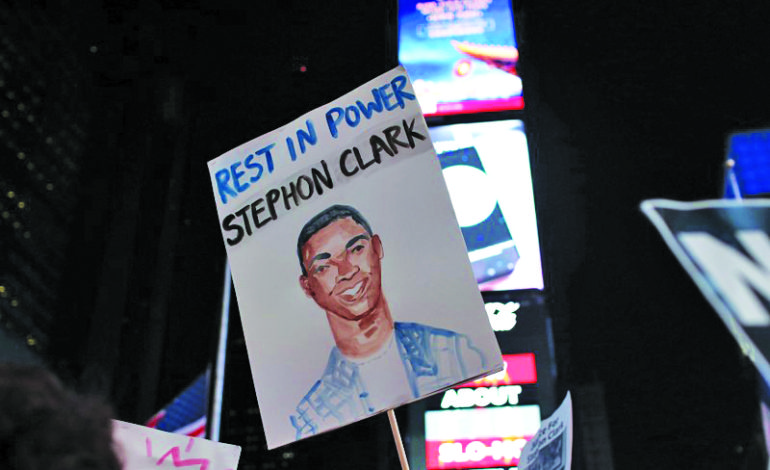 Protesters hold up an illustration as they march in Times Square in the Manhattan borough of New York City, during a protest against the death of Stephon Clark in Sacramento, California, March 28 - Reuters

Sacramento, CA — Scores of Black Lives Matter activists protested in Sacramento on Thursday after the funeral of an unarmed black man who was shot dead by police in the latest such killing to spark street demonstrations in the United States.

More than 100 protesters gathered outside the Sacramento County District Attorney’s Office from 3 p.m. local time to demonstrate over the death of Stephon Clark, according to the Facebook page of the local chapter of Black Lives Matter.

Clark, 22, was gunned down on the night of March 18 in his grandparents’ backyard by police responding to a report that someone was breaking windows. Police said the officers who shot Clark 20 times feared he was holding firearm, but that he only had a cellphone.

His death was the most recent in a string of fatal shootings of black men by police that have prompted anger and a renewed national debate about bias in the U.S. criminal justice system. The Rev. Al Sharpton, a prominent civil rights leader, delivered a eulogy at Clark’s funeral.

A day before that, activists disrupted a city council meeting, chanting “Stephon Clark” as his brother Stevonte sat on the table in front of Sacramento Mayor Darrell Steinberg, according to video broadcast by CBS News.