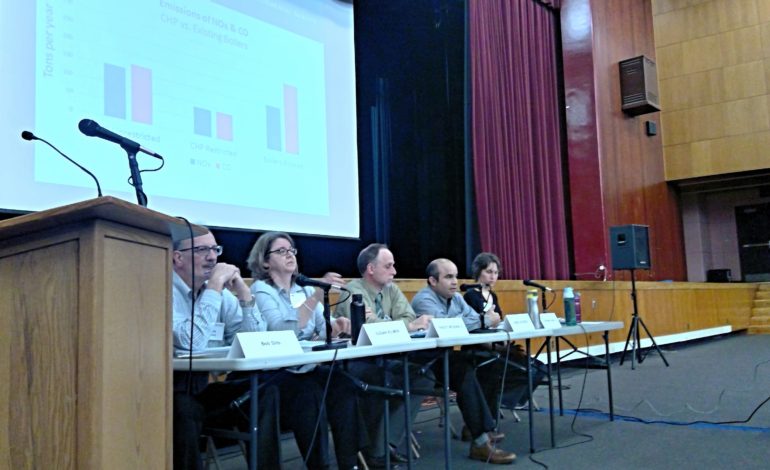 DEARBORN — A crowd of about 75 Dearborn residents, activists and elected officials met at Edsel Ford High School on March 27 to voice their concerns to the Michigan Department of Environmental Quality about a proposed permit submitted by DTE Dearborn CEP LLC.

DTE is requesting a new combined heat and power plant to be constructed on the campus of Ford Motor company’s R and E Center at 1641 Carroll Shelby Way East.

Scott Geordt, director of onsite operations for DTE Dearborn CEP LLC, filed the permit to install the application, called No. 144-17.

With plans to shut down turbines on the campus, energy needed to be created from a new source, according the permit proposal. DTE is planning “on shutting down some of the existing boilers,” according to the permit application. “However, to do so, they need steam to be provided from somewhere else. The new DTE plant will provide this steam. It will also produce electricity which will be sold to the grid.”

DTE is attempting to get approval to install two “combined cycle natural gas-fired turbines” with associated duct burners and heat recovery steam generators, according to the application.

The proposal describes the equipment as a combined heat and power plant (CHP).

“The proposed plant will consist of two natural gas-fired combustion turbine generators with associated heat recovery steam generators,” the permit application reads. “The combustion turbine generators must exhaust through the heat recovery steam generators (HRSG), so the proposed permits combines them into one emission unit. Each HRSG will be equipped with duct burners. In addition, a small natural gas-fired emergency engine is proposed.”

At the public comments hearing one resident asked why DTE wasn’t being required to search for technology that wouldn’t hurt the residents or the environment as much.

“There was no legal requirement for them to put on the most up-to-date technology,” Asselin said. “There was no requirement to do that additional review on controlled technologies because they did not trigger it.”

Asselin said that it would have been initiated if DTE had triggered the “Prevention of Significant Deterioration review” by requesting “add-on” technology.

When residents pointed out that more environmentally friendly technology is out there and asked why DTE isn’t required to use it, MDEQ officials maintained that they have no legal grounds to do so.

“We have an increase in pollution being proposed and we have the ability to prevent that, why don’t we require them to prevent that?” another resident asked.

“An increase in emissions doesn’t trigger that requirement,” Asselin said. “We have no legal way to force them to do that. You have to trigger certain levels in order to force them to go through that review. Just because there is a state-of-the-art facility somewhere that’s put all the bells and whistles on it does not mean that every future facility of that type throughout the country has to do that. It’s not required, even from the Clean Air Act.”

The permit application was filed in September. Emails available on the NSR Public Notice Documents page of the Michigan.gov website between Scott Klipa, senior environmental engineer at DTE Energy Resources, and MDEQ staff show Klipa was upset with the application process on December 27. A portion of the permit.

“Can I get an update for timing of the permit?” Klipa wrote to MDEQ staff. “CJ had committed to getting draft conditions to district by Thanksgiving and now we are past Christmas. We will be getting access to the site on 4/1/2018 and really need to have the permit in-hand to begin construction by that date.”

In the same email, Klipa suggested the public comments hearing may be unnecessary.

“Now that we are getting to draft conditions and moving forward as a separate stationary source with a synthetic minor permit application less than 90 percent of threshold, it would appear that we would not need to go out for public comment. What is the position of AQD [the Air Quality Division of MEDQ] on this?”

“I am looking into your public comment question, but it involves more than just my opinion,” an email from Asselin to Klipa reads. “You are right that the circumstances are different from the previous application, so I need to verify what the AQD stance will be. I am hoping to know more tomorrow. I understand you are frustrated and I am sorry that I am involved with that.”

Asselin said one of the problems she and the MDEQ encounter is that they do not have the authority to tell companies to switch their chosen fuel.

“We have very specific rules and regulations on how we have to look at a project,” she told the crowd. “If someone says, ‘I want to put in a natural gas power plant’, I can’t say, ‘how about a solar plant?’ I’m not allowed to do that.”

“We think the proposed permit is not fully compliant with rules and regulations, and therefore isn’t as protective of the health of nearby residents as it should be,” Nick Leonard, a staff attorney at the Great Lakes Environmental Law Center who also teaches environmental law at the University of Michigan-Dearborn, told The AANews. “Specifically, we know other very similar facilities use better pollution control technology than that proposed at the DTE facility. Michigan rules require the facility to use the best available control technology. Additionally, we think the facility should be required to continuously monitor its emissions to ensure that it’s regularly complying with emissions limits.”

MDEQ officials will review the public comments, advise DTE on any changes required and will likely approve the application, as required by law.