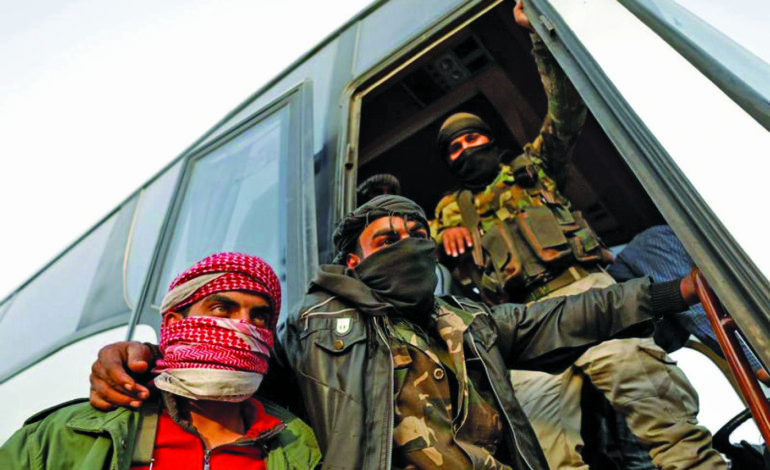 Rebel fighters gesture as they stand next to a bus before their evacuation, at Harasta highway outside Jobar, in Damascus, Syria, March 26 - Photo by Reuters

BEIRUT — The massive Russian-backed Syrian military offensive in the suburbs east of Damascus is almost over, with rebels holed up in just a single town after abandoning the rest of the eastern Ghouta enclave, Moscow declared on Thursday.

Russia and the rebel faction controlling Douma, the last Ghouta town still in insurgent hands, said they were still negotiating over the fate of the town. Moscow said it saw a chance of the remaining insurgents quitting Douma.

Thousands of fighters have accepted Russian-brokered deals to leave other parts of the enclave in the past week with their families on government-supplied buses, giving them safe passage to other insurgent-held areas. Tens of thousands of other civilians have stayed behind to accept state rule, and tens of thousands more have fled across the frontline.

The collapse of rebel control in eastern Ghouta, after one of the fiercest campaigns of the seven year war, has delivered the insurgents their worst defeat since they were driven out of Aleppo in 2016.

Deputy Foreign Minister Mikhail Bogdanov said there could be progress in talks with fighters from the Jaish al-Islam group, which holds Douma, RIA said.

Syrian government forces have massed around Douma after rebels were reportedly given a deadline to leave.
A local Syrian newspaper said troops were preparing for a “huge” operation.

The government’s ally Russia is said to have told the group late on Monday it had 48 hours to agree to be evacuated to Idlib province like other factions.

But Jaish al-Islam has said its fighters want to disarm and stay.

Eastern Ghouta, an early center of the 2011 rebellion against President Bashar al-Assad, was until last month the biggest and most populous remaining rebel stronghold near the capital.

Its capture will cap a string of battlefield victories for the Assad government since Russia sent its air force to join his war effort against the rebellion in September 2015, making his position unassailable.

Assad and his allies say their offensive was needed to end the rule of Islamist militants over civilians and to stop rebel mortar fire on Damascus, which state television says has killed dozens in recent weeks.

Syrian rebels blame each other for their defeat

Meanwhile, Syrian rebel factions are blaming each other for opening the way to their defeat in eastern Ghouta.

The rivalry between the factions – Failaq al-Rahman and Jaish al-Islam – had led to the effective partition of the enclave since 2016 and fueled bouts of deadly violence that played to the government’s advantage.

Their rivalry has at some points mirrored tensions between their regional sponsors: Saudi Arabia, which has backed Jaish al-Islam, and Qatar, which supported Failaq al-Rahman.

The Jaish al-Islam military spokesman, in an interview with al-Hadath TV, said Failaq al-Rahman had rejected a proposal to mount a shared defense of Ghouta and accused it of cutting water supplies needed to fill defensive trenches.

“These trenches dried up, which sped up the regime’s advances,” said Hamza Birqdar, the spokesman.

The Failaq al-Rahman spokesman told the same TV station that Jaish al-Islam had staged a weak defense of the enclave, which advancing government forces split into three separate pockets.

“Failaq al-Rahman was stabbed in the back … via the frontlines that Jaish al-Islam was supposed to be at,” said Wael Olwan, Failaq al-Rahman’s Istanbul-based spokesman.

A Syrian official said the “conflict between the terrorist groups” in eastern Ghouta was one of the factors that had helped the military “achieve what it has achieved in a short space of time.”