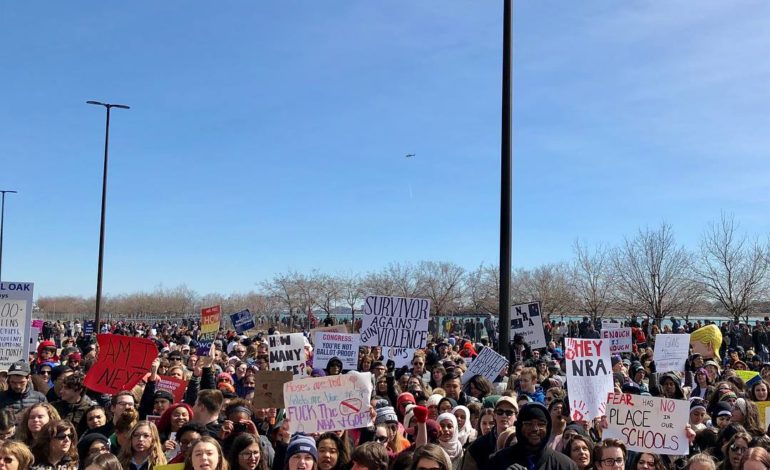 DETROIT — On Saturday, March 24, thousands of people — the majority of them students — filled downtown Detroit, carrying signs and chanting for tighter gun control laws at the biggest “March for Our Lives” in southeast Michigan.

These individuals joined in solidarity with participants in simultaneous marches in cities across the nation.

After the March 14 nationwide school walkout in the wake of the deadly Feb. 14 shooting that left 17 people dead at Marjory Stoneman Douglas High School in Parkland, Fla., March for Our Lives was the biggest anti-gun movement.

Rima Saad, 17, an activist who was part of both the walkout at Fordson High School and the March for Our Lives in Detroit said this was a “big Facebook event” when asked about how it was publicized.

“It was a student-led movement, where a student committee was formed from all over Michigan, and politicians, sponsors, supervisors and advisors were present,” she said.

“They told the students not to stand at the back or on the sides, there were about 10,000 people at the event,” she added. “The event was funded by donors through a gofundme.com platform.”

While people were marching for tighter gun laws in Detroit, a counter-rally was taking place in Lansing, calling for the preservation of gun ownership rights.

Khalil El Saghir, a consultant at Wayne RESA (Regional Educational Service Agency) and a candidate for the Dearborn Board of Education, was one of the participants at the movement.

“As a father of two girls in school, a veteran and a citizen, participating in this event that was led by students ignites a conversation that leads to a better and safer place,” he said. “The great thing about this movement is that it comes from victims and not from polarized politicians; and I hope it sticks to its grassroots that unfortunately stemmed from the Florida tragedy, so that the movement does not lose its purpose and momentum.”

“I believe that it is the right of a citizen to bear arms, but rifles and machine guns have no place between civilians,” he said.

“I think that it was well organized, mostly by students,” said Tamar Nemeth, a student at Eastern Michigan University and an activist, who was also present at the march. “They say that gun control laws will not work, but the fact that the movement took place on Detroit’s Riverwalk facing Canada — a country with gun control laws that is doing fine with these issues— sends a message.”

U.S. Sen. Debbie Stabenow (D- Mich), was among the many speakers at the march. She urged the youth to vote in support of gun control measures.

According to the Detroit Free Press, Stabenow told the crowd that “the other side just thinks we’re going away, but we’re not”, a comment received with cheers from the crowd.

Most of the participants were high school students, families of victims of gun violence, politicians, non-profits and gun reform activists.

What distinguishes this movement is that students and survivors of one of many tragedies resulting from a lack of gun control laws are leading it. The activism by the survivors of the high school shooting in Parkland has contributed to pressure on President Trump to order a Justice Department restriction on bump stocks as well as a proposal for tougher background checks on gun buyers.

Parkland survivors have also swayed Education Secretary Betsy DeVos to call for Congressional hearings and sparked a conversation about gun control measures in the GOP-controlled state legislature in Tallahassee, Fla.

Nemeth is organizing a “Town Hall for Our Lives” at Wayne State University’s Student Center on April 7, where current Democratic and Republican candidates will be participating in a discussion on gun laws.

“The media tends to forget and move on easily,” she said. “And we’re trying to keep the conversation on gun reform alive.”

The town hall, which will be open to the public, will be a discussion and not a debate.