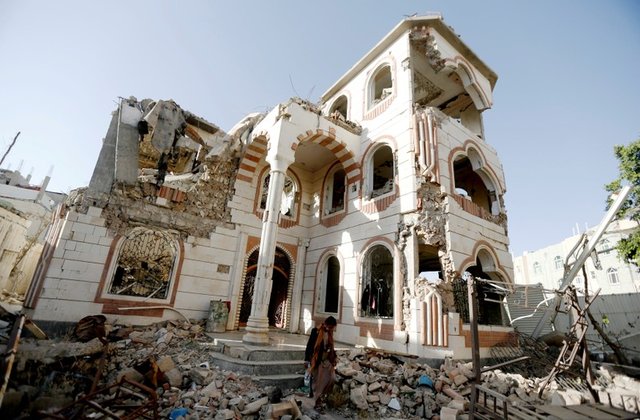 A guard walks in the yard of a house destroyed by air strikes in Sanaa, Yemen - Reuters

UNITED NATIONS — On Wednesday, the United Nations Security Council condemned a barrage of missile attacks against Saudi Arabia by Yemen’s Houthi group and expressed grave concern at reports of violations of an U.N. arms embargo on Houthi leaders.

In a statement, the 15-member Security Council expressed alarm at a Houthi threat to continue such attacks in the region.

Sunday’s attacks threaten to sharply escalate a war that has unleashed what the United Nations considers the world’s most urgent humanitarian crisis. Millions of Yemenis live under threat of mass starvation and disease, at the mercy of combatants who have sometimes cut off food and medical supplies.

“The members of the Security Council expressed their grave concern at the continued deterioration of the humanitarian situation in Yemen and the devastating humanitarian impact of the conflict on civilians,” the statement said.

Independent U.N. experts reported to the Security Council in January that Iran had violated U.N. sanctions on Yemen because “it failed to take the necessary measures to prevent the direct or indirect supply, sale or transfer” of ballistic missiles and other equipment to the Houthi group.

The U.N. Security Council statement on Wednesday did not name who is violating the arms embargo.

Last month, Russia vetoed a Western bid for the United Nations Security Council to call out Tehran for failing to prevent its weapons from falling into the hands of the Houthis. Iran has denied supplying the Houthis weapons.

The Trump administration has for months been lobbying for Iran to be held accountable at the United Nations.