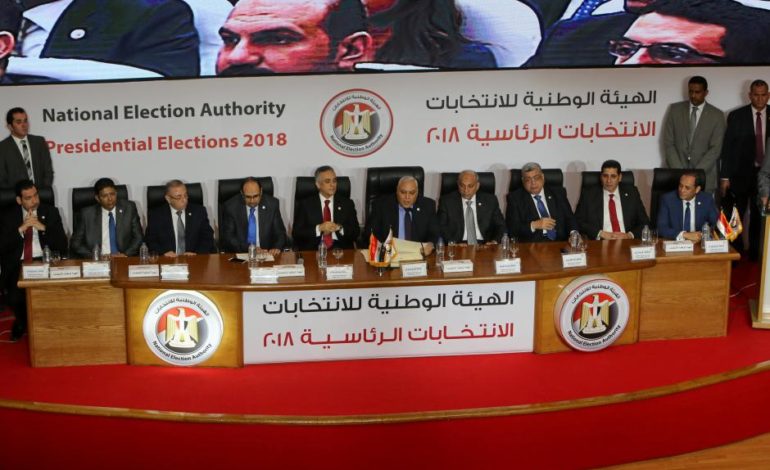 CAIRO – Egyptian President Abdel Fattah al-Sisi has been re-elected with 97 percent of votes, the same proportion that the former military commander secured four years ago for his first term but with a lower turnout, official results showed on Monday.

Turnout was 41 percent, despite efforts to get as many Egyptians as possible to polling stations during last week’s vote. Sisi had been virtually guaranteed a landslide win, confirmed by early tallies as voting ended on Wednesday.

The election featured only one other candidate – himself an ardent Sisi supporter – after all serious opposition contenders halted their campaigns in January. The main challenger was arrested and his campaign manager beaten up, while other presidential hopefuls pulled out, citing intimidation.

Sisi said he had wanted more candidates to run and that he had nothing to do with the opposition withdrawals.

The election commission said the vote was free and fair as it gave the results in a televised announcement on Monday.

Sisi won a total of 21.8 million votes compared with 656,534 for his opponent, Moussa Mostafa Moussa, whose tally was less than the 1.8 million spoiled ballots.

The lower turnout is a potential setback for Sisi, who suggested before the vote that he saw it as a referendum on his presidency rather than a genuine contest. Turnout in the 2014 vote that won him his first term was 47 percent.

State media had portrayed failure to vote as a betrayal of Egypt. Some voters said they were offered incentives to cast their ballots including money and food, local and international media reported, but did not say who had made the offers.

Officials said that if any such incidents took place they were not state-sponsored and extremely limited.

Critics say former general Sisi’s popularity has been eroded amid tough economic reforms, which have left most Egyptians worse off, and also an unprecedented crackdown on dissent.

His supporters say those measures are needed to stabilize the country, which faces a stubborn ISIS insurgency in the northern Sinai Peninsula and which was rocked by unrest after a 2011 uprising that ousted veteran leader Hosni Mubarak.

Sisi led the 2013 military overthrow of Egypt’s first freely-elected president, Mohamed Mursi of the Muslim Brotherhood, after protests against Mursi. Sisi swept to victory in an election a year later with 97 percent of the vote.

The United Nations expressed concern over the crackdown on dissent, including media, which took place before last week’s vote.

During voting last week, the U.S. embassy in Cairo said on Twitter it was “impressed by the enthusiasm and patriotism of Egyptian voters”.

Russia congratulated Sisi on his election win ahead of the official results, and regional ally King Salman of Saudi Arabia called Sisi on Monday to express support, saying his victory came as a result of strong efforts to combat terrorism.