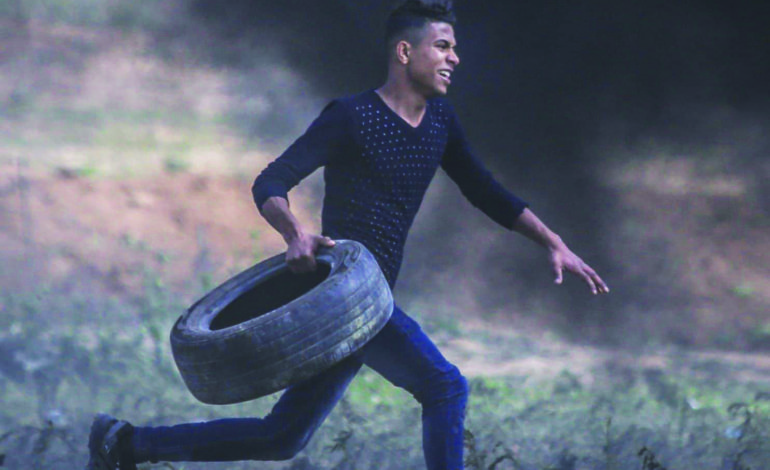 It was also entirely avoidable. The victims were taking part in the annual Land Day march commemorating the 1976 killing of six Palestinians who were protesting Israel’s confiscation of thousands of acres of their land. This year’s event also marks 70 years since the ethnic cleansing of Palestinians and the displacement from their land during the establishment of the State of Israel.

Participants marched to the heavily fortified eastern boundary between Gaza and Israel, in a symbolic show of return to their land and the homes from which they and their families originate. Yet even before the march began, Israel announced that it would deploy more than 100 snipers, helicopters with tear gas, and tanks to shoot the protesters. By the day’s end, Israeli soldiers had killed 18 Palestinians with live ammunition and injured more than 1,700. This despite the fact that not a single Israeli soldier was harmed or even in any danger.

Here lies the tragedy: Palestinians demonstrating against the killing of unarmed Palestinians are themselves gunned down by Israel’s military.

The Israeli army tweeted that “Nothing was carried out uncontrolled; everything was accurate and measured, and we know where every bullet landed.”

The Abdul Fattah Abdul Nabi, a 19-year-old Palestinian, was shot dead during Friday’s protests in the Gaza Strip tweet was quickly deleted when video emerged of soldiers shooting 19-year old Abed el-Fatah Abed el-Nabi in the back.

The tragedy lies not only in the killing of Palestinians, but in the responses of Israel and the United States to this massacre. It has become commonplace, indeed expected, that the killing of Palestinians is either ignored or, more frighteningly, applauded by Israelis, as was the 2014 killing of more than 2,200 Palestinians in Gaza. Indeed, Israeli Defense Minister Avigdor Liberman — who once called for Palestinian citizens of Israel he deemed disloyal to be beheaded — quickly praised Israel’s military, stating that its soldiers “deserve a commendation.”

Calls by Palestinians, the European Union and the United Nations for an independent investigation were swiftly rejected, with both Israel and the Trump administration blocking any endorsement of an investigation by the Security Council.

Israel also immediately announced that it would not even go through the theatrics of carrying out its own internal inquiry. The message that Israel and the United States have sent is that Palestinian lives are dispensable, unworthy of any investigation, even when it is clear that their lives were taken unlawfully. An independent investigation would highlight that Gaza remains under Israel’s 50-year-old military rule and decade-old naval blockade, cut off from the world.

It would undoubtedly highlight that, in addition to the electrified fence on Gaza’s eastern and northern sides, Gaza is blocked in with a concrete wall to the south and by the naval blockade to the west. It would highlight that all of the Palestinians killed were killed inside Gaza, and within the undefined Israeli-imposed “buffer zone” that further cuts into Gaza’s territory, in many places by as much as 1,000 feet.

An independent investigation would undoubtedly highlight that live fire may only be used against combatants participating in military action. Killing people is neither a video game nor a sport.

In sum, an investigation would reveal that for Israel, it does not matter that Palestinians protest; our lives are considered expendable. It is for these reasons that Israel and the Trump administration are adamantly blocking any investigation of what took place Friday.

This is why the time has come for an arms embargo and sanctions against apartheid Israel, similar to the arms embargo that was imposed by the United Nations against apartheid South Africa. This is not without precedent in the United States, where the Arms Export Control Act has the power to ensure that arms are not given to a government “which engages in a consistent pattern of gross violations of internationally recognized human rights.”

Similar legislation exists in the E.U. What is missing is political will. Instead, as the United States and the E.U. continue to try to appease Israel, Palestinians pay the price — with their lives.

-Diana Buttu served as a legal adviser to the Palestinian negotiating team and was directly involved in negotiations with Israel and the Palestine Liberation Organization. This article appeared first in The Washington Post opinion section.