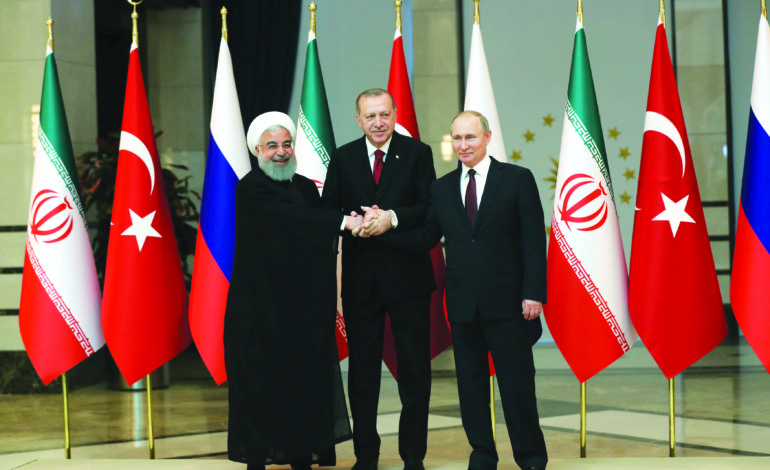 Presidents Hassan Rouhani of Iran, Tayyip Erdogan of Turkey and Vladimir Putin of Russia pose before their meeting in Ankara, Turkey April 4 - Reuters

Turkey, Iran and Russia pledge to work for stability in Syria

ANKARA — Turkey, Iran and Russia pledged on Wednesday to accelerate efforts to bring stability to Syria, underlining their joint commitment to the country a day after President Trump raised the prospect of withdrawing U.S. troops.

A statement by the three countries after a summit meeting of their leaders in the Turkish capital Ankara said they were determined to “speed up their efforts to ensure calm on the ground” in Syria.

While their decision to work together has done little to reduce violence, in part because of their own military interventions on opposing sides, it underlined their central role just as questions grow over Washington’s presence in Syria.

Around 2,000 U.S. troops are deployed in northern Syria on a mission to battle the remnants of an ISIS that once controlled the area. Trump had said on Tuesday it was time to pull them out.

Trump said, “I want to get out — I want to bring our troops back home. It’s time. We were very successful against ISIS.” Trump metaphorically barged into the Ankara meeting and hijacked the mind of the three leaders. What is the Syria that the three presidents would discuss – a Syria with open-ended U.S. military presence or a Syria denuded of the Americans?

Iranian President Hassan Rouhani said developments in Syria, where the Syrian army and its allies have driven back rebels in recent years, showed that the United States had “failed to topple the Syrian government” of President Bashar al-Assad.

“They wanted to fuel insecurity in order to maintain their own interests, but they have gained no success,” he told a news conference after talks with Turkish President Tayyip Erdogan and Putin. He added, however, that he believed U.S. forces would stay in Syria.

Iran and Russia have both strongly supported the Syrian government led by Assad, while Turkey backed anti-Assad rebels. Those differences have continued on the ground despite their political cooperation aimed at winding down some of the violence.

Iran’s state television quoted Rouhani as telling Erdogan and Putin that Afrin should be handed over to Syria’s army.

“The developments in Afrin can only be useful if they do not violate Syria’s territorial integrity, and control of these areas should be handed over to the Syrian army,” Rouhani said.

Erdogan has said the Turkish army will extend its military operation after Afrin to the town of Tel Rifaat and then further east along Syria’s border with Turkey – a prospect which has angered Tehran.

“Whatever the intentions are, Turkey’s moves in Syria, whether in Afrin, Tel Rifaat or any other part of Syria, should be halted as soon as possible,” a senior Iranian official told Reuters before Wednesday’s talks.

Seated alongside Putin and Rouhani, Erdogan focused on areas of common ground, saying that Turkey wanted to build a mobile hospital to help treat civilians coming from formerly rebel-controlled parts of eastern Ghouta, on the edge of Damascus, which the Syrian army has taken over.

Militants and civilians who were evacuated from eastern Ghouta have been taken to the northwestern Syrian province of Idlib, which borders Turkey.

Erdogan proposed providing a bakery to help feed refugees and build housing on both sides of the border. “We can save these people from tents and container cities by building housing. We can, all together, make that zone safe,” Erdogan said.
Summit conclusions The result of the Ankara summit as reported, can be summarized as follows:

1. Continuation of the works for the Syrian constitution by the delegations that were formed in Sochi.

3. Rebuilding the infrastructure of Syria which experienced huge destructions due to the war and carrying out efforts for the return of refugees who left their homes.

Participants at the summit agreed to hold the next meeting in Astana in mid-May, but much water might flow under the bridge by then. The Kremlin disclosed that Trump has invited Putin to the White House. This summit, if it is convened, can present a vista of new possibilities.

Another important factor is the fate of the Joint Comprehensive Plan of Action (JCPOA), which remains the “known unknown.” Trump is due to make a decision on the Iran nuclear deal by May 12. And the geopolitics of the Middle East could change dramatically, depending on what he decides to do – especially if Trump were to pull the U.S. out of the JCPOA.

The conventional wisdom is that changes at the U.S. State Department and the National Security Council signal a more hawkish U.S. foreign policy toward Iran. But there are serious arguments too as to why Trump may not sound the death knell of the JCPOA and opt instead to simply give the nuclear deal a fresh lease of life, as he has done twice already.

Depending on the state of play in U.S.-Iranian relations, the geopolitics of the Middle East could change and Syria is the main theater where this could see visible impacts in the immediate future.

But for now it seems that the summit has reinforced the obvious, that a trilateral dialogue is an important statement. What emerges from summit on the Bosporus is that the western influence in Syria (and the Levant) is inevitably on the wane. The summit also underscored that the three countries intend to reinforce their influence in Syria.

While the summit highlighted the intention of the three countries to strengthen cooperation among each other, they certainly have conflicting goals in Syria. For instance, the Turkish priority was that Russia and Iran continued to acquiesce with its military operation. Erdogan stated at the joint press conference, “Turkey will not stop until all regions under PYD/PKK (Kurdish militia) control, including Manbij, are secured… Turkey values Russia and Iran’s solidarity with its Afrin operation, we will establish grounds for peace in Afrin.” Rouhani and Putin neither nodded agreement nor dissented.

Perhaps the single most important outcome of the Ankara summit where all three countries have shared interest is in their forceful affirmation of the unity and territorial integrity of Syria and their rejection of “all attempts to create new realities on the ground under the pretext of combatting terrorism.”