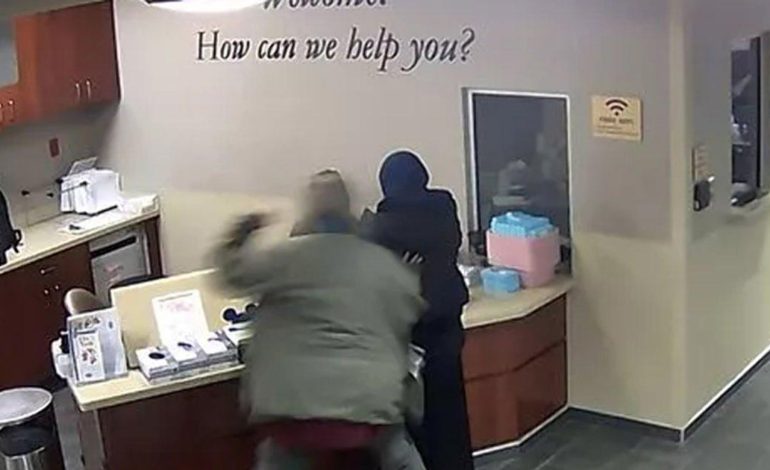 A screen grab of surveillance video of John Deliz punching a Muslim woman at Beaumont Hospital in Dearborn, Feb. 10

An emergency room nurse and two administrators at Beaumont in Dearborn told The AANews they had not heard about the incident or received any notification from the hospital until after the lawsuit was filed.

DEARBORN – She went to the ER for a possible broken jaw and was punched in the face.

A 19-year-old college student was speaking to a receptionist and beginning to fill out paperwork in the emergency waiting room of Beaumont Hospital, when a disheveled man briskly walked behind her and knocked her to the ground.

Surveillance video shows a startled receptionist, a paramedic and a security guard springing into action and stopping him from repeatedly punching the woman in the face.

The man, identified as John Salvatore Deliz, was arrested and charged with assault, but the woman is still suing Oakwood Healthcare Inc., the hospital’s parent company, in Wayne County Circuit Court for failing to prevent the attack. According to a police report, Deliz had been wandering the buildings hallways and lingered in the waiting room and asked people for cigarettes while he waited for a friend to pick him up. He had attempted to seek mental health care, but was not admitted by the hospital.

The report also stated the security officer said he could stay, only if he’d “sit down and leave the other patients alone.”

The woman, who wears a hijab, was dropped off by her mother at around 3:30 a.m. on Feb. 10 to receive treatment for a jaw that was possibly broken after she slipped and fell on the ice.

A few seconds later, she suffered three blows to the face.

In the report, police said the woman was “visibly shaken” and that she “had no idea who Deliz was.”

In the lawsuit, Majed Moughni, the woman’s attorney, said Deliz had escaped from a group home showing signs of schizophrenia and bipolar disorder and was admitted ito the hospital for not taking his medication. It’s unclear who admitted him.

Our thoughts are very much with the victim of this assault. We hope that this can shed more light on the frequent, ongoing violence that occurs in our hospitals.

The police report also shows that officers were dispatched to the hospital, “on report of a disorderly subject who was causing problems after being discharged.”

However, Moughni stated in the lawsuit that hospital security should have held the man before and after the attack, especially because he was harassing patients and visitors in the building.

The hospital will need to defend itself from an “ethnic intimidation” lawsuit, as Moughni said the woman was the only visibly Muslim person in the room.

“This is a classic case of Islamophobia,” he told the Detroit Free Press of the attacker’s motive.

Moughni said the woman is seeking $25,000 in damages and suffers from emotional distress.

In a letter to The AANews, Beaumont acknowledged that a patient, “became physically aggressive with another patient in the waiting room” and that Beaumont security personnel, “responded immediately and took action to protect the patient and others in the emergency room.”

The letter also states that Beaumont staff cooperated fully in an investigation by Dearborn Police.

“We take pride in our service to this diverse community and want all patients to feel welcome and safe at Beaumont,” the letter reads.

Beaumont’s public relations director did not answer questions regarding whether hospital staff were notified soon after the incident.

However, an emergency room nurse and two administrators at Beaumont in Dearborn told The AANews they had not heard about the incident or received any notification from the hospital until after the lawsuit was filed.

The Silent No More Foundation, a non-profit advocacy group that aim to protect healthcare workers before, during and after workplace violence, said in a statement that while there was an immediate action, Deliz should not have been “wandering asking people for cigarettes.”

It added that the healthcare industry experiences more non-lethal assaults than any other field.

“Our thoughts are very much with the victim of this assault,” the foundation said in a statement. “We hope that this can shed more light on the frequent, ongoing violence that occurs in our hospitals. Perhaps civil cases are a worthy tool in this fight.”