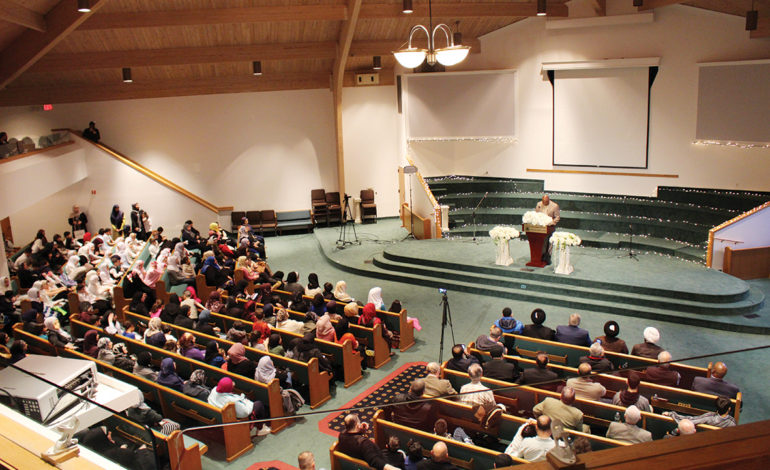 Rev. Wendell Anthony speaks to congregants at the Islamic Institute of America in Dearborn Heights, March 30 - Photos by The AANews

DEARBORN HEIGHTS — On March 30, a day that marked the birth of Imam Ali ibn Abi Talib and the crucifixion of Jesus Christ, Rev. Wendell Anthony, president of the Detroit Branch NAACP, spoke to a diverse, capacity crowd about “the voice of human justice” at the Islamic Institute of America.

A civil rights icon himself, Anthony’s presence and message during the service was a call for building stronger bridges between people of different faiths and to unify efforts against inequity and discriminatory policies.

“He who has a thousand friends has not a friend to spare, and he who has one enemy will meet him everywhere,” Anthony said, quoting the revered religious icon. With great insight into the life and legacy of Imam Ali, Anthony recounted how the Muslim leader earned the confidence of Prophet Mohammad to become his right-hand man.

He pointed out that Christians observed Good Friday, which commemorates the crucifixion of Jesus Christ, on that day and he compared Dr. Martin Luther King Jr.’s message to Imam Ali’s.

Anthony scorned the Trump administration for being “insensitive”, saying that it’s too focused on staying out of stormy weather rather than dealing with whether or not, “we will have justice for our people.”

He listed issues including education, unemployment, war, immigration and separation.

He ridiculed a highly-circulated “Punish a Muslim Day” flyer that originated in the U.K. and has made its way into the U.S., creating an environment of fear and heightened vigilance among many in Muslim communities.

“They’ve been writing bad notes about us since 1619 and we’re still here,” Anthony said. “We built America; our blood is commingled with the soil of this land, just like your blood.”

He spoke vehemently against the addition of a question about citizenship to the 2020 Census, saying that it was never designed to be about citizenship, but to determine an accurate count of the population.

He added that the anticipated question was a suggestion from President Trump’s 2020 campaign committee, rather than being approved by the House and Senate.

He added that districts receive government funds allocated for roads, defense, education and health services, among others and “if the numbers are short, the services will be short.”

Anthony passionately called on the congregants to fight against the governmental injustices faced by immigrant and poor communities.

“Justice is a verb, meaning you gotta act,” he exclaimed. “Sometimes we are afraid; we get to thinking that we can’t make a change, that things are so difficult for us, that we cannot make a difference.”

He ended his spirited address by recounting an incident with his cousin as a boy, growing up in Missouri. He and a group of other boys were playing in a creek in St. Louis one day, when his cousin began yelling for help to save him from drowning.

Everyone began laughing at him, Anthony recalled. They told him to stand up, because the water was only 3-feet deep.

From the young, who were on the edge of their seats,  to the elderly patiently listening, the entire congregation gave Anthony a standing ovation.