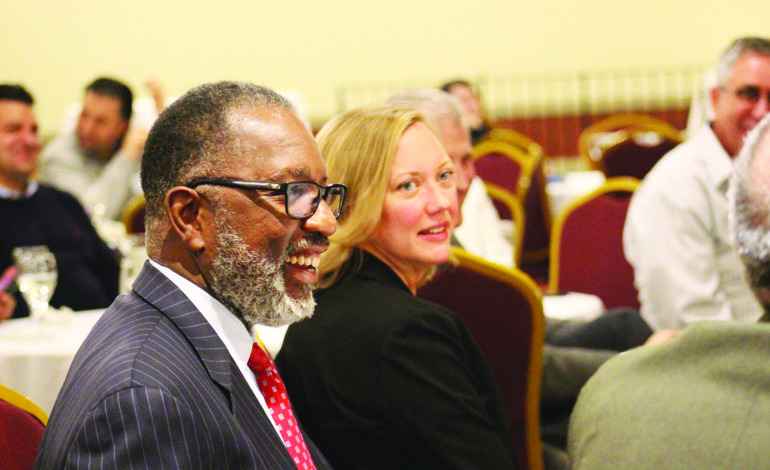 Both justices are running for reelection this year.

Last year, Gov. Snyder appointed Wilder as the 112th Justice to the Michigan Supreme Court. Prior to that, Wilder served as a judge on the Michigan Court of Appeals from 1998 to 2017, and at the Washtenaw County Trial Court from 1992 to 1998.

“I like to joke that I have the trifecta in the judiciary, having served in all three levels of the court,” Wilder said in his speech at the fundraiser. “Be assured that your support not only means a lot to us, but we will continue to do all the things that brought you here tonight.”

When asked about his vision, Wilder said, “We do not change the law because we don’t like it. We protect people’s constitutional rights and we certainly protect their rights under the law, but we do not pick up new policy because we do not like what the legislature did. That really gives full respect to the people’s right to elect their representatives and I really believe that the separation of powers and that balance between the branches is extremely important, so I’m very honored to have the opportunity to serve in this role.”

Wilder also introduced Clement, saying she has a trifecta in having served in all three branches of government. He also said she, “brings a wonderful perspective, but she is also a very hard working justice.”

Clement also joined the Michigan Supreme Court last year, becoming the 11th woman and the 113th justice to serve on the bench.

“I am a wife and mother of four children…without the support of my husband and children I wouldn’t be able to do this,” she said in her opening remarks.

Prior to her appointment to the bench, Clement served as chief legal counsel to the governor.

“It was a tremendous job, working for Governor Snyder,” she said, adding that she’d told Snyder working for him had been her favorite job before he appointed her to the bench.

As to her judicial philosophy, she said the judiciary has a specific role to play and it is not to be the legislature.

“The judiciary is there to say that the law is not what my own personal beliefs are,” she said. “So, that’s what we work towards every day. We are working very hard to uphold the court that we have.”

Justice Brian K. Zahra told The AANews that he and Wilder “go way back.”

“I have been a judge for 24 years, he 26 years,” Zahra said. “We both started in the circuit court; we worked together for the court of appeals for 12 years…he is very thoughtful and driven by the law. He understands his proper role of what it means to be judge and I couldn’t have asked for a better person to be on the court.”

As for Clement, Zahra said she brings a little bit of a different perspective.

“It’s a valued perspective because she worked in the legislative branch and she understands law making-role, yet she appreciates the fact that all we can work off of is what the legislature gave us,” he said. “So, when we start to speculate a little bit about what the legislature is thinking, she brings us back home.”

Clement worked as legal counsel for then-Senate Majority Leader Mike Bishop (R-Rochester) in 2010 and had previously served as policy adviser in the Senate Majority Policy Office from 2006 to 2010.

“Clement brings a tremendous perspective that was lacking from our court,” Zahra said. “And that is why you have a court of seven, where everybody brings a little bit of a different piece. Collectively, we hopefully bring a better interpretation of the law, and I couldn’t be happier to work with both of them.”