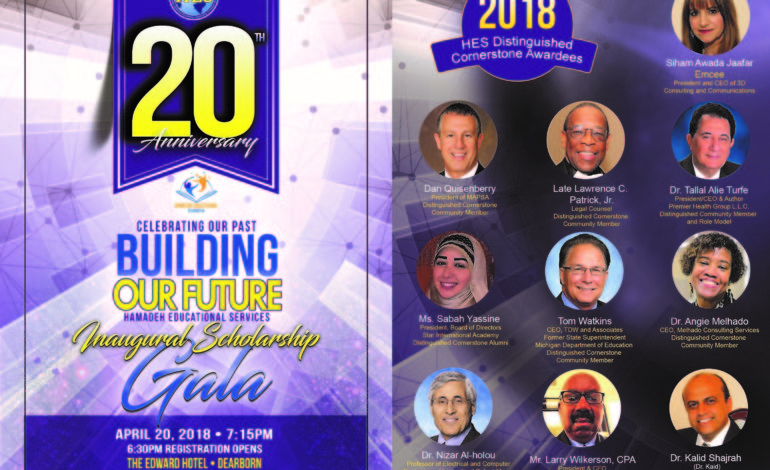 DEARBORN HEIGHTS – They say it takes a village to raise a child, but effective avenues to accomplish that are few and far between.

Hamadeh Educational Services (HES), will do just that by holding its inaugural Scholarship Gala on Friday, April 20 at the Edward Hotel in Dearborn.

Proceeds from the event will fund the scholarships for students graduating this year so they can continue to pursue higher education.

The school will be giving out $96,000 to students who have already received letters of admission from universities or colleges.

The two categories of scholarships are a $1,000 gold and a $500 silver award. Criteria include GPA scores, a clean record and an essay about how the students would incorporate HES’ pillars to solve the humanitarian crisis in Yemen.

The event’s entertainment program will also showcase student talents, like putting on a musical, choir, dabke and marching band performance.

The favors given to the audience are also art made by students.

The event will also kick off HES’ alumni chapter.

Salah Yassine, a cornerstone member and distinguished alumnae who was one of the first students when HES opened in 1998 and is now president of the board of directors at Star International Academy, will also be recognized, along with her family.

Some of her family members also work at HES.

“We value the families who have been with us and continue to support us through our ups and downs,” Hamadeh said, adding that it’s the difference in results compared to other schools that makes HES’ academies an attractive schooling option.

“Student success always comes first at HES, but without help from the community, a college education would not be possible for many of them,” Hamadeh said. “Scholarships provided through the generosity of our donors enable students to continue their educational pursuits beyond high school, preparing them to thrive in the global economy.”

For the past 20 years, Hamadeh Educational Services has been committed to providing students with an outstanding, high quality education that focuses on the Michigan Common Core Curriculum standards.

The HES is comprised of more than 3,000 students and 400 staff members and features Pre K-12 programs at its academies that cater to the needs of the community and students who come from diverse cultures and backgrounds.

HES has also made open enrollment available. There is no tuition and the kindergarten program is a full school day. The schools teach Arabic as a second language and offer AP courses and dual enrollment opportunities.

Khawaja is an entrepreneur, philanthropist, CEO and founder of Allied Wallet, the fastest growing online payment processor in the world at a rate of 200-500 percent a year, an evidence of trust in his services. Allied Wallet serves more than 150 million merchants in 190 countries, supporting 164 currencies worldwide. Khawaja has been featured in more than 100 publications for his contributions to technology, society and economic growth.

Judge Mariam Saad Bazzi was appointed by Gov. Snyder to the Third Circuit Court, which covers Wayne County, in May 2017. She has more than 11 years of experience with Wayne County Prosecutor’s Office. Prior to her appointment to the circuit court, Bazzi’s passion for public service led to her involvement in numerous community organizations. In 2017, she was honored and recognized by Crain’s Detroit Business as one of its 40 under 40 for her contributions to her community and profession.

Tickets are $100 per person and include entry into the event and dinner. Tickets can be purchased at www.aefusa.org.