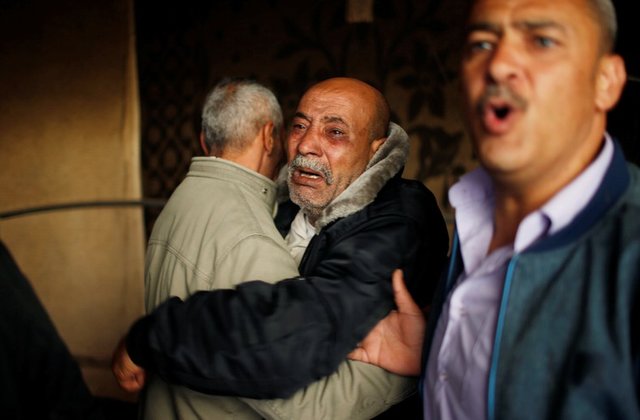 Palestinian relatives of Hamas Mohammed Hejelah, who was killed in an Israeli air strike, mourn during his funeral in Gaza city, April 12 - Reuters

GAZA – An Israeli air strike on Thursday killed a Hamas gunman and wounded another and troops later shot dead a man close to the border, Palestinian medical officials said, as tensions across the Gaza Strip border simmered.

Israel said the air strike was launched in response to a bomb attack on a military vehicle on the Gaza border on Wednesday, in which there were no casualties. When gunmen shot at the aircraft, they were fired upon, the Israeli army said.

The second man killed was shot when he came close to the border fence in the southern Gaza Strip near the town of Khan Younis and died in hospital, Palestinian medical officials said.

Israel has declared a no-go zone close to the Gaza border which it has tried to enforce and has displayed video footage in which the frontier fence is seen being cut and breached and says explosives have been planted along it to target its troops.

Both sides are bracing for Palestinian demonstrations at the Gaza border on Friday – the third round of weekly protests that are scheduled to peak in mid-May, the 70th anniversary of Israel’s founding.

Israel deems the demonstrations an effort by Hamas, the Islamist group that exercises de facto control over Gaza, to stoke Palestinian hostility toward it and provide cover for potential attacks across the border fence.