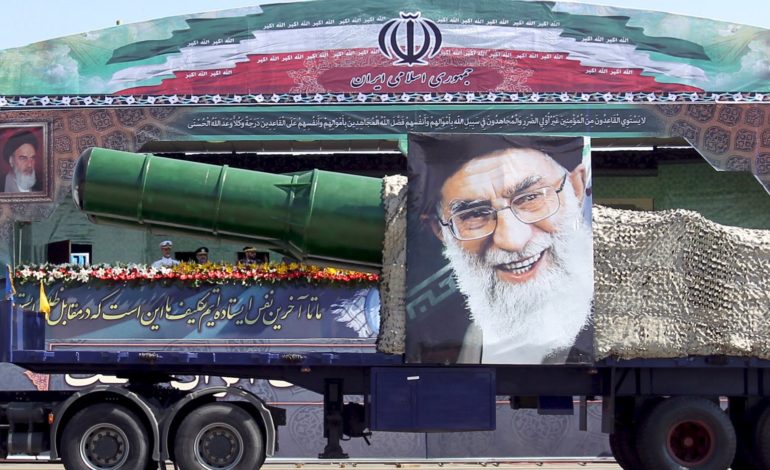 A military truck carrying a missile and picture of Iranian Supreme Leader Ayatollah Ali Khamenei during a parade marking the anniversary of the Iran-Iraq war, in Tehran, September 22, 2015 - Reuters

WASHINGTON/PARIS – European officials are making headway toward an agreement to address U.S. concerns about the Iran nuclear deal, a European diplomat said on Thursday, but a second diplomat said it was unclear if President Trump would embrace their work.

Senior diplomats from the three European nations that are party to the deal met Brian Hook, the U.S. State Department’s director of policy planning, in Washington on Wednesday to try to find a way to salvage the arms control pact.

The crux of the 2015 agreement between Iran and six major powers – Britain, China, France, Germany, Russia and the United States – was that Iran would restrict its nuclear program in return for relief from sanctions that have crippled its economy.

On Jan. 12, Trump delivered an ultimatum to Britain, France and Germany, saying they must agree to “fix the terrible flaws of the Iran nuclear deal” or he would refuse to extend the U.S. sanctions relief that it calls for. U.S. sanctions will resume unless Trump issues new “waivers” to suspend them on May 12, although it is unclear how fast they would go into effect.

Trump sees three defects in the deal: a failure to address Iran’s ballistic missile program; the terms under which international inspectors can visit suspect Iranian nuclear sites; and “sunset” clauses under which limits on the Iranian nuclear program start to expire after 10 years. Trump wants all three strengthened if the United States is to stay in the deal.

A second European diplomat was more pessimistic, telling Reuters that even if U.S., British, French and German diplomats reach agreement it was unclear whether Trump would embrace it.

Iran, which pledged under the deal not to seek nuclear arms, says its nuclear program is only for peaceful purposes. It has said it will stick to the accord as long as the other parties respect it, but will “shred” the deal if Washington pulls out.